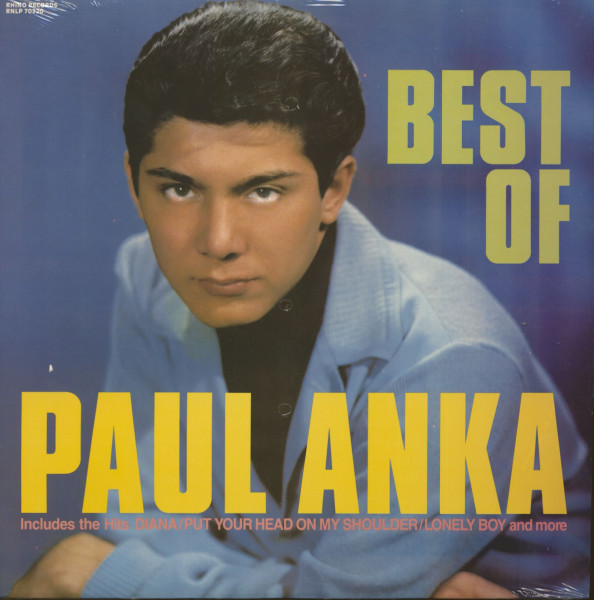 (Rhino) 14 Titles - Original 'ABC-Paramount' Recordings - Sealed Cut-out LP
No 'bout a doubt it, Mr. A has shaken a lot of action. He cut his first hit. a nifty nine-million seller. at fifteen, wrote the theme for Carson's Tonight Show, and hung an albatross around Sinatra's neck when he put English lyrics to 'My Way'. He's handed hits to Humperdinck and Holly ('It Doesn't Matter Anymore'), hosted Hullabaloo, and gone to the bank over whomever it was Had His Baby. In 1959, he elected not to fly on to Fargo with tourrnates Buddy, Ritchie and the Big Bopper. He did, however, elect to have a nose job—just like Annette—if you believe what you read in the March '62 issue of Teen Screen. I know I do. At his peak, though, during the period represented by the songs on this album, Paul Anka did something much more significant than all of the above. He presided over the glory days of American Teenage: you know, the whole Highschool of the mind of '57 to '61. Anka was the golden boy of the Bandstand Generation, that mild bunch who came together over cheeseburgers and suicide Cokes to discuss the big game and who did what with whom at the hop afterward.

In the very best way. Anka's music epitomizes Fifties American Teenage—its saddleshoe mix of lightheartedness and self-importance, its tendency to shed croc tears over the most trivial and naive pursuits. (Take away the lightheartedness and you get the Thompson Twins or Tears for Fears. so maybe things haven't changed that much after all—but that shoots to hell our whole thesis. so let's just drop it.) Simply put, the point of American Teenage popmusik was: 'heavy' doesn't necessarily make you happy. Keep it light, hang loose and can I call you next week? Enter our man Ank, from Ottawa, in the summer of 1957 ...

History has it that young Paul wrote 'Diana' about an eighteen-year-old neighbor gal, one Diana Ayoub. How hot was she? Where is she now? Who cares? As surely as she inspired Anka. she provided the perfect metaphor for all the heat and heart-ons suffered by millions of others. The Young Boy' Blues, they call it Paul had it bad, and made it sound great. Yearn, baby, yearn. February, '58. While 'Get A Job' and 'Tequila' slug it out for the Number One slot, Anka slides into seventh with 'My Destiny', the first of his big ballad moves. He sounds twice his age, and the noise carries clear to Vegas. Eddie Fisher looks over his shoulder, goes back to the main lounge for a pop 'Crazy Love' (May '58) is 'Destiny' remade/remodeled into Presleyan melodrama (e.g., 'Don't'). Another February, another ballad. Anka kicks off '59 with '(All Of A Sudden) My Heart Sings', a croon tune standard. the only song here that didn't come from his own pen. It barely cracks the Top 20, but by July there's 'Lonely Boy', Number One for four weeks and unquestionably Ank's finest side; a tough, string-driven thing build on crashing guitar chords and 'lonely at the top' introspection, it scoops Ricky Nelson's 'Teenage Idol' and Privilege as an insider's look at rock superstardom—and it swings, too. 'Put Your Head On my Shoulder' (late '59) is P's best ballad yet. Soft and dreamy and arlolescent, it's among the makeout classics of its day, standing next to the best workof masters as Como and Percy Faith. Moreover, it's a clear influence on the preeminent Sixties romanticist, Bri-fi hirnself, who cribbed its title and tone for Pet Sounds' petting-est track some seven years later.

'It's Time To Cry' (January '60) marks a return to pre-'Shoulder' form. It hits, proving that even Yon Teens are not immune to the lure of 'You'll Never Walk Alone' type schlock. Eddie Fisher hoists anothe  Manilow and the guys from Air Supply get close to their radios.

By 1960 Diana Ayoub was old news. Her place in Ank's heart had been taken by the Mouseketeer Mona Lisa, Annette Funicello. Paul told the world in 'Puppy Love' an anguished plea for toleranc,. understanding and more clam sauce that climaxes with the tremulous cry 'Someone help me, help me please!' Spicy Italo elements likewise color 'My Hometown', which starts off vaguely Neapolitan but winds up somewhere South of the Border. Paul closing with a chorus of undocumented 'Ai-ai-yai's.'

'summer's Gone' (late '60) belongs to that canon of Am Teen tunes which treats the tender issue of seasonal romance ('It Might As Well Rain Until September',  'Girl Don't Tell Me'). Here, our man, having wooed and won, bemoans the departure of his love thang. Like a fading tan line, it's melancholy, baby. By February, he's back on top, pouring it all out in 'the Story Of My Love', a rockin' little 'Diana'rewrite. The groove sticks, and by May he's settled in for a spell; 'Tonight My Love Tonight' recasts 'Story Of My Love', but adds a tango vibe and some vocal slurring that suggests a sendup of El's 'Surrender'. Big hunk of laughs.

The streak climaxes in July with Anka's last AmTeen smash, 'Dance On Little Girl'. The castanets clap, the kettledrums thunder, mandolins solo and the lithe girls chirp themselves silly in a perfect 1961 record: post-Drifters, pre-Spector and pure Pop. Paul anchors it all with a slick, soaring vocal. And that's all he wrote.