The Altered Five Blues Band: Holler If You Hear Me (CD)

The blues is designed as a form that allows the artist to express sorrow or jubilation in equal measures. The men in Milwaukee's acclaimed Altered Five Blues Band push the limits of this axiom on their sixth studio album, Holler If You Hear Me. The 2018 Blues Music Award nominees once again recorded over five fast and furious days in Nashville, TN with three-time Grammy winner Tom Hambridge, who produced the band's chart-topping album Ten Thousand Watts, earning them a first place in the blues category of the 2019 International Songwriting Competition.

The 13 original tracks are a testament to the songwriting skills of guitarist Jeff Schroedl, who wrote or co-wrote all the songs to exploit the powerful vocals and exuberant showmanship of frontman Jeff Taylor. Bassist Mark Solveson anchors the rock-solid rhythm section with drummer Alan Arber, while Raymond Tevich melds his crafty keyboard work to create the group's muscular Midwestern sound.

Article properties: The Altered Five Blues Band: Holler If You Hear Me (CD) 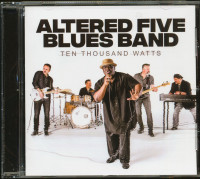