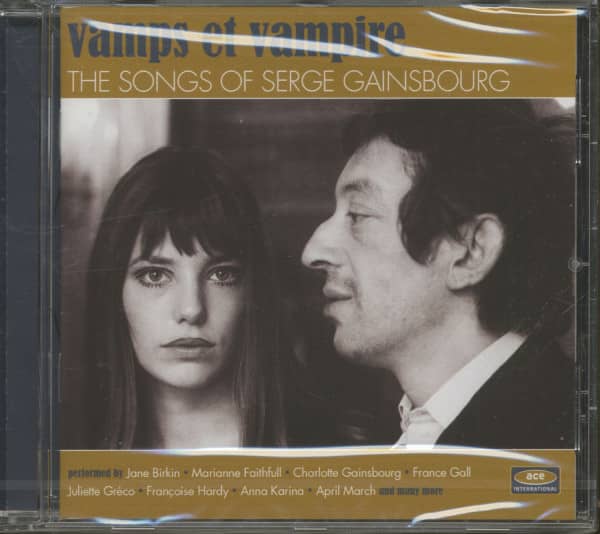 Please inform me as soon as the product is available again.
$17.57 *

From existential chanson to ye-ye and beyond, 25 songs by one of the greatest icons of Gallic pop culture. Performed, appropriately, by a stellar all-female cast

This latest edition in our Songwriter series spotlights Serge Gainsbourg, one of the greatest icons of Gallic pop culture. “The image of beauty and the beast, the Rive Gauche provocateur arm-in-arm with the ravishing icon, was a recurring feature of Gainsbourg’s career,” once observed Malcolm McLaren, a man not unfamiliar with the power of provocation. Spanning the entire Gainsbourg canon, our collection ranges from existential chanson to yé-yé and beyond – performed, appropriately, by a stellar all-female cast.
Had Gainsbourg got his way, Marisa Berenson would have become his co-star in Slogan. Fortunately for him, Jane Birkin landed the role. After some frosty early encounters, they soon became inseparable. Reluctant at first, Jane agreed to record what became Gainsbourg’s biggest-ever hit. It was B-sided by ‘Jane B’, conspicuous for a lyric lifted from her passport and a melody mooched from Chopin. Also here is the pun-laden ‘Con C’est Con Ces Conséquences’ from “Baby Alone In Babylone”, the fifth of the seven albums to emanate from their partnership.
Jane Birkin aside, the performer with the most Gainsbourg songs in their catalogue is Zizi Jeanmaire. Many of those songs were written specifically for her stage shows, notably the 1972 production Zizi Je T’Aime. ‘Vamp Et Vampire’, our title track, is from “Bobino”, a 1977 album comprising almost entirely Gainsbourg compositions.
His long-term relationship with Jane notwithstanding, Gainsbourg’s highest profile liaison was with Brigitte Bardot. They became an item during the sessions for 1968’s Le Brigitte Bardot Show TV special, represented here by ‘Harley Davidson’ and ‘Contact’.
From his earliest days as a jobbing musician Gainsbourg hankered for his songs to be performed by Juliette Gréco, the black-garbed embodiment of bohemian Gallic cool. She eventually recorded many. ‘La Javanaise’ and ‘Strip-Tease’, featured here, are from her eighth album, issued in 1963.
Prior to France Gall recording Gainsbourg’s songs his name had not featured on a big hit record. They might come across as cute yé-yé trifles, but ‘Poupée De Cire, Poupée De Son’ and ‘Les Sucettes’ are custom-penned songs threaded with typical Gainsbourg wordplay and double meanings.
‘L’Anamour’ and ‘Comment Te Dire Adieu’ are the earliest of the six Gainsbourg songs in the vast catalogue of Françoise Hardy. ‘Comment Te Dire Adieu’ was first recorded by veteran American singer Margaret Whiting as ‘It Hurts To Say Goodbye’ but it was the hipper instrumental version that attracted Françoise. Her manager suggested asking Gainsbourg to write a French lyric, which he duly dictated over the phone to Françoise while she was staying at the Savoy in London.
The CD closes with ‘Laisse Tomber Les Filles’ by April March, one of the most ardent latterday champions of Gainsbourg, whose songs are paramount in her early discography. Some she recorded in both their original French and with her own English lyrics. ‘Laisse Tomber Les Filles’ thus became ‘Chick Habit’, as which it reached a mass audience in the soundtrack of Quentin Tarantino’s Death Proof.
In addition to the customary track commentary, the 24-page booklet features a fascinating essay by Gainsbourg biographer Alan Clayson and a foreword by April March.
By Mick Patrick