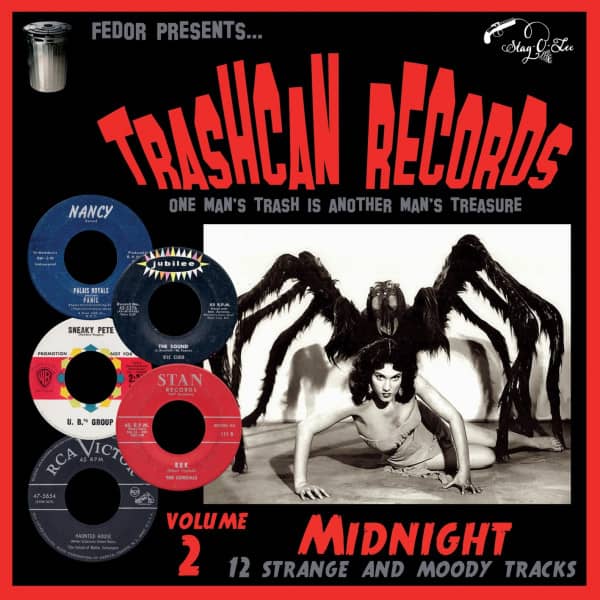 (Stag-O-Lee) 12 Tracks - Volume 2 - Midnight - features six very strange and six very moody side vinyl jewels from Fedor’s box.
Side A is a one-way trip to Weirdsville, starting with the spooky Haunted House by The Voices of Walter Schumann from 1954. It took some serious audio-restoration and volume boosting to get a decent sound out of its noisy pressing, but what a great track!
Another early RCA release is the oddball Radar Love by band leader Ralph Flanagan. I have no idea who the manic singer is or why she was invited in the studio in the first place, but the band swings hard.
Next is the UB’s Group, who deliver a great two-sider with the groovy Sneaky Pete. The flip Percussive Woman is a cool beatnik spoken word oddity.
Following this is Eek by the Cordials, a sleaaazy sax grinder. Way cool!
Then we find The Sound by Vic Caro, best described as an episode of the Twilight Zone TV show put into music.
And we end this side with Freddy Flintstone’s completely bonkers instro, Quarry Stone Rock. I always thought this 45 was heavily influenced by Dean Elliot and his Zounds album, but it was actually recorded a year earlier.
Over to the Moody side where I present six dark and gloomy instrumental 45s from my collection that haven’t been comped before. First, is Hank Levine, who had a big chart hit with Imagine. His Midnight is an earlier and much rarer effort. Recorded for a division of a Geiger counter company (!) in the mid-1950s and re-released a couple of years later on the Tops label, this haunting instrumental is certainly top shelf collector’s material.
Next, we find King Bartel with The Matador… an ultra-cool jazzy tune that just builds and builds! After this is Rusty Isabell, who is best known for his rockabilly, 45 Firewater, but I like the intense Manhunt way better.
Our mystery group on this compilation are the Little Dickens. The superbly produced Jazz in Old Alcatraz is such an amazing tune... just listen to that crazy drum solo.
Following are The Palais Royals, who must have listened very closely to the Viscounts hit version of Harlem Nocturne because it has the same moody vibe.
And finally, we close off this Trashcan volume with the seductive exotica jazz of the Mike Baltch Quartet, a very obscure 1962 record that is almost impossible to find.