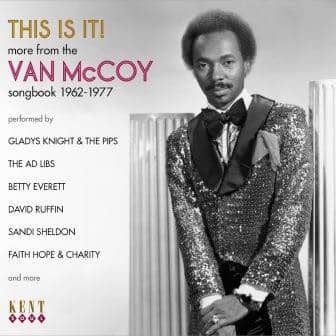 Some years have passed since “The Sweetest Feeling”, Kent’s first dip into the catalogue of the late Van McCoy, was issued to acclaim from soul fans all over the world. Back then we made a promise that, should sales warrant a second volume, we would release one. Well, it’s taken a while for it to come together – nine years, in fact – but we are delighted to finally bring you that long-promised follow-up, “This Is It!”
As we promised in the notes to the previous set, the accent this time is predominantly on the upbeat. “This Is It!” collects a significant number of Van’s biggest and rarest 60s/Northern Soul favourites, multiple modern-crossover treats from the 70s and, for balance, a few slower opportunities to get their breath back for those who mostly like to dance but occasionally like to listen. Although the inevitable licensing issues prevented us from securing a couple of tracks we would like to have included, we feel certain that everyone who loves the work of Van McCoy will be more than happy with the contents.
As well as Northern and modern rarities by the likes of Sandi Sheldon, Kenny Carlton, the Vonettes and Bill Harris, among others, “This Is It!” also contains several of Van’s most commercially successful songs and productions, including Melba Moore’s title track and Gladys Knight and the Pips’ UK chart monster ‘Baby Don’t Change Your Mind’. Several artists featured here, including the Spellbinders, Chris Bartley, the Ad Libs and Brenda and the Tabulations, are indelibly associated with Van, having spent most of their careers working with him.
It’s been 40 years this summer since Van succumbed to a fatal heart attack, at the age of just 39. Van may have left us a long time ago but his timeless music never will, and here are 24 more of the very best examples of “Van McCoy Magic”.