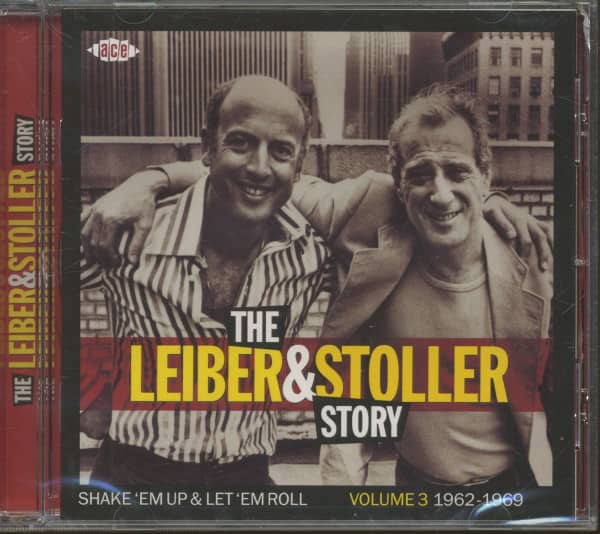 (ACE Records) 24 tracks 1962-69 with 20 page booklet
This month we are celebrating the release of the third and final volume of Ace’s salute to the songs and productions of rock‘n’roll songwriters supreme, Jerry Leiber and Mike Stoller. It’s a volume that takes their career through from the early 60s, up to the end of that decade – the point where their work begins to appeal to a broader audience than ours. Like its two predecessors, the CD shows that Leiber and Stoller were always two or three steps ahead of their contemporaries.
Many people think of them just as rock‘n’roll and/or R & B songwriters. As our CDs show they could do ‘all that and more’ where the art of popular song writing is concerned. They had taken everything from blues to teen pop in their stride in the 1950s, and these skills helped them come to terms with diverse styles, including soul, bubblegum, MOR and even country music, in the 1960s. The scope of the material here is something to be admired and, hopefully, enjoyed by those who check it out.
L & S wrote classics in the 60s, too. Songs like On Broadway, Jackson, I Who Have Nothing and Is That All There Is are as worthy of the accolade of ‘all time great’ as are Hound Dog, Smokey Joe’s Café from the duo’s earliest rushes of creativity. It’s a fact that some of the finest recordings of the 1960s bear the names of Leiber and Stoller as writers.
Leiber and Stoller took their place among the all time greats many years ago, and happily they will be able to enjoy Ace’s three volume salute to their musical achievements. We’ve worked closely with them and Mike’s son, Peter, on the series and its content enjoys their endorsement (although we had to twist their collective arms a few times to get them to agree to include some of the tracks, which they perhaps didn’t like as much as Mick Patrick and I did). We’ve enjoyed working on this series, even when we’ve had to find substitutes for contractually unavailable tracks - as many great L & S-penned recordings currently are.
Even though that’s “all there is” from Ace as far as this series is concerned, we hope that it will encourage everyone to dig deeper into the work of two of the greatest songwriters and producers of the 20th century. Shake ‘em up, and let ‘em roll!