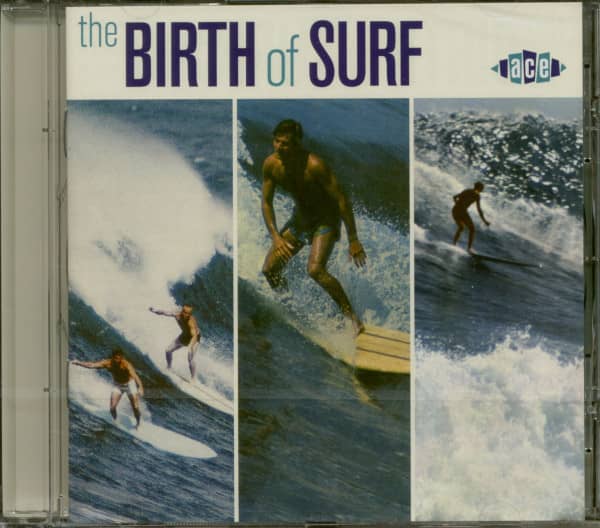 Various: The Birth Of Surf (CD)

(Ace Records) 26 tracks - a killer multi label collection 1958-1963 with 20 page color booklet.
When the Beach Boys sang their way into the American Top 20 in 1962 with Surfin' Safari they introduced the nation to a pastime that had become a way of life for many on the Californian coast. But they weren't the only ones celebrating the thrill of riding the waves. With the charts dominated by big studio productions featuring clean-cut smooth-crooning pop stars that they couldn't hope to emulate, aspiring young rock musicians turned to the instrumental to keep the rock’n’roll flame alive.

THE BIRTH OF SURF traces the evolution of instrumental surf music from its rock’n’roll roots through to the minor classics and big surf hits of its peak year in 1963. It opens with half a dozen up-tempo early recordings from influential artists like Duane Eddy, Link Wray, the Ventures and the Fireballs and includes the popular Moon Dawg by the Gamblers which hit the Los Angeles charts in 1960. Presented chronologically the CD then moves on to early surf titles such as Latin'ia by the Sentinals and Bustin' Surfboards from the Tornadoes.

If there's one track that defines the style it's Miserlou by Dick Dale & The Del-Tones. For sheer excitement it is hard to beat, and the cascade or surfer's slide effect created by Dale with a swoop of the hand down the guitar's fretboard became a much-used technique by the surf guitarists who followed. Miserlou heads a sequence of surf classics that includes the genre's big hits Pipeline by the Chantays and Wipe Out by the Surfaris.

As if its title strength alone wasn't enough, “The Birth Of Surf” features first-time-on-CD rarities such as Earthquake by Aki Aleong & The Nobles and Latin Soul from the Original Surfaris - neither of which have been released in any form since 1963. Also enjoying its first CD outing is El Toro by the Surfmen (the version used on “Rare West Coast Surf Instrumentals” is an alternative arrangement featuring piano in place of the background sax) and another notable inclusion is the hit single version of the Surfaris' Wipe Out. Rather surprisingly this has become sought-after recently because most compilations have used an earlier unedited version of the track.

Focusing on the early recordings, “The Birth Of Surf” does not stray beyond surf's peak year of 1963 but it does include the only other genuinely surf-styled instrumental hits Baja by the Astronauts and Penetration by the Pyramids. It also includes the cream of the self-released recordings from the myriad of young surf groups that sprang up across California. Dynamic performances abound such as the Illusions on Jezebel, the Blazers with their cutely titled Beaver Patrol and the menacing Fiberglass Jungle from the (pre-Turtles) Crossfires.

With so many gems on board “The Birth Of Surf” is the strongest single CD compilation of instrumental surf music ever assembled. Every track is a killer, each one capable of heading up an album of its own. As a result it's an exciting listen as well as an essential purchase for the collector and casual buyer alike.  (Alan Taylor)