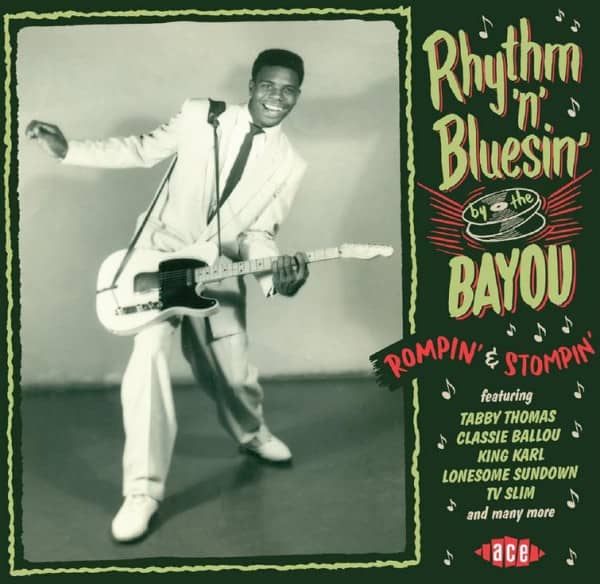 Letting the good times roll again, with this second visit to the dynamic South Louisiana R&B scene there is no waver in the quality of music. We’ve added the work of another Louisiana record man, Sam Montel from Baton Rouge, to the vast stockpile of material in the vaults of J.D. Miller, Eddie Shuler, Floyd Soileau and Jake Graffagnino.

Sam (originally Montalbano) got into the music business when his childhood friend Jimmy Clanton hit the charts. Sam became his road manager and the whole scene got into his blood. He decided to start his own record label when only 18 years old. His first release, Lester Robertson’s ‘My Girl Across Town’, is included here, as is a previously unissued outing from Robertson.

The Montel label had considerable success with artists including John Fred, Dale & Grace and the Boogie Kings, all attracting strong sales. We will be pulling out more R&B, swamp pop and rockin’ goodies from these vaults for future releases in the “By The Bayou” series. The other label owners – J.D. Miller from Crowley, Eddie Shuler from Lake Charles, Floyd Soileau from Ville Platte and Jake Graffagnino from Opelousas– have all had recordings featured on our earlier CDs. Like Sam, they could all spot talent and got the best out of their artists. It means Ace has the opportunity to bring you dynamic tracks from an area of the USA so very rich in talent.

In addition to the talents of the lead vocalists, the backing musicians on many of the tracks are also very accomplished. Guitar Gable is heard on many titles, as is Katie Webster on piano, sax giant Lionel Torrence, drummers Jockey Etienne and Warren Storm and Lazy Lester, who would play whatever instrument was asked of him; all are featured on many of the Crowley recordings. Classie Ballou’s band was used often at Goldband, while the Upsetters, Little Richard’s former outfit, can be heard on Lester Robertson’s tracks.

The excitement of discovering new material such as the track by Tabby Thomas, the previously unknown and romping version of ‘Flat Foot Sam’ by TV Slim and the downright nasty ‘Oh Mama (Cajun Blues)’ by Classie Ballou is undiminished. Bracketing them with other fabulous unknown recordings, unissued alternates and long deleted masterpieces is a pleasure and a privilege. If you have rhythm in your bones and a love of the raw and rockin’ then “Rhythm’n’Bluesin’ By The Bayou – Rompin’ & Stompin’” is going transport your spirit to a Louisiana juke joint. (Ian Saddler)