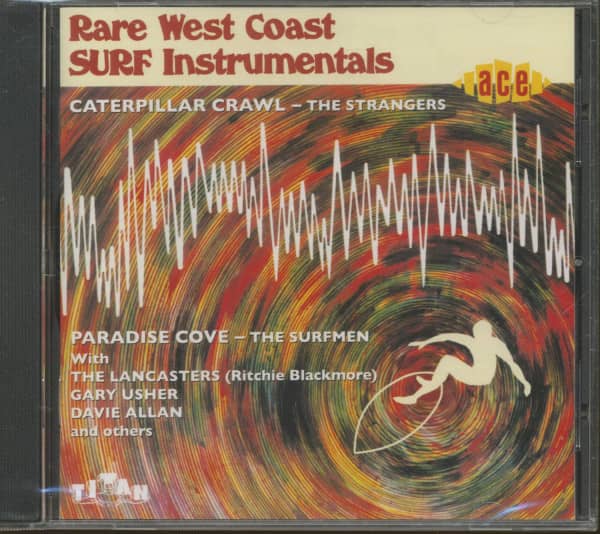 (Ace Records) 24 tracks (54:25) with 16 page booklet.
-
Founded by the late George Brown, Titan Records was one of a myriad of small independent labels which sprang up in LA during the late 50s when recording costs were so low that an aspiring entrepreneur could cut a session on the cheap, press up a few hundred 45s and set up shop as a record label. In fact, it was common to spend more on 'promotion' - usually backhanders to local deejays in return for a few plays - than on the product itself.

The Strangers, whose Caterpillar Crawl was Titan's inaugural release, were led by Joel Scott Hill, an exceptional guitar player whose career stretched well into the 1970s when he replaced the late Al Wilson in Canned Heat and subsequently joined the reformed Flying Burrito Brothers. There was a lot of action in between - for instance, he played on Chris Montez's timeless mega-hit Let's Dance - but we haven't the space to annotate it all here - check out the chunky info-packed booklet for that.

Caterpillar Crawl was a fair-sized US hit in 1959 and the Strangers went on to cut further singles for Titan, all of which are heard here. Hill's bluesy, stinging licks on the frenetic Hill Stomp (from 1959), give lie to the myth that 60s guitar heroes such as Clapton and Bloomfield were the first white boys to play the blues with any conviction. (Incidentally, Hill re-cut the tune with Canned Heat in 1971.)

As if by osmosis, the early 60s saw the formation of a great many, mostly amateur, mostly instrumental bands across Southern California in unspoken anticipation of the forthcoming surf music trend. The Surfmen were one such typical outfit. Paradise Cove c/w Ghost Hop was a big local hit in California in 1961. They made several equally impressive follow-ups, and again these are all included.

Titan issued the first 45 (on its Marc subsidiary), by Davie Allan, the fuzz-guitar maestro who twanged his way through the incidental music for 60s cult movies such as "Riot On Sunset Strip" and "The Wild Angels" and occasionally made the US charts in his own right with instrumentals such as Apache 65 and Blues Theme. War Path (issued on Marc in 1964) was a two-minute slice of over-modulated mayhem. This big money record is issued here for the first time on CD, together with its original flip, Beyond The Blue.

Earthquake c/w Satan's Holiday, a US-only release on Titan as by The Lancasters, was actually a one-off guitar instrumental produced in London by the indomitable Kim Fowley and featured guitar pyrotechnics by a young and impecunious Ritchie Blackmore. This is another highly sought after item.

We've sneaked in a couple of sought after vocal sides by Gary Usher, one of the founders of the US surf'n'drag scene of the early 60s. Usher made his first record for Titan in 1961, shortly before he met Brian Wilson with whom he was to co-write early Beach Boys songs such as 409 and In My Room. Though he sang in a thin adenoidal tenor and could only muster a few chords on the guitar, Usher's unusual approach was already manifest on Driven Insane. The intention had been to produce a cross between Endless Sleep and To Know Him Is To Love Him (two late 50s biggies), but the result was a very strange record indeed - almost painfully inept yet strangely hypnotic and quite unlike any other on the market. Usher's effete, lisping vocal heightened the impression of a man living on the edge.

22 rare West Coast rock and surf instrumentals (plus bonus vocals) pulsating with high and low pitched twangs and moody atmospherics, all brilliantly mastered from original tapes.
Quentin Tarantino would have a field day (whatever happened to him, by the way?). Quentin, if you're reading this, please check out track #16 for your next movie.
(Rob Finnis)