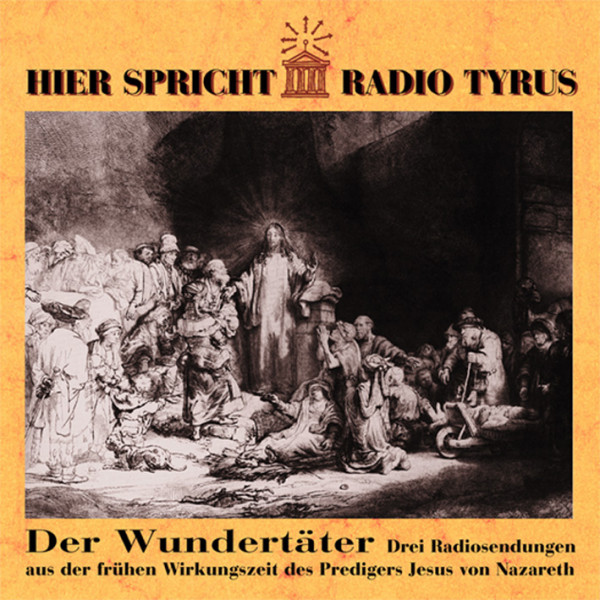 This article is deleted and can no longer be ordered!
Please inform me as soon as the product is available again.
P Secure bonuspoints now
Description
Learn more about Various - Radio Tyrus
Review 0
Description
Der Wundertäter more
Close menu

"Time has come and the kingdom of God is near. Turn to God and believe in the Gospel!"
With these words, about 2000 years ago, a man came into the light of world history who actually has the worst prerequisites for this: Members of a despised people in an occupied country on the distant periphery of the Roman Empire. Fatherless son of a family of craftsmen from a tiny and remote mountain village.

For a short time he preaches through a rural area of barely more than three day hikes around and collects a dozen students - people from humble backgrounds like himself. The people worship him as a prophet, for he preaches by inner religious authority and not as the civil servants of their religion. They take offence at his way of life and call him a "eater and wine drinker", for he does not despise the joys of life and can be seen in the company of well-known "sinners". But even his enemies cannot deny: This Jesus from the small village of Nazareth in Galilee - he has the amazing gift of doing miracles and healing the sick.

The managers of a fictitious Phoenician radio station RADIO TYRUS have become aware of the new miracle worker. The Jewish landscape of Galilee is in its neighbourhood. In three broadcasts they report live on the work of the amazing preacher from Nazareth. And some of the reporters become even involuntary witnesses of amazing miracles: The healing of a psychopath - an inexplicably rich fishery - a paralytic who can walk again. At a village wedding, a correspondent gets drunk with water supposedly transformed into wine and soon finds himself swimming in a drowning herd of pigs - the miracle man from Nazareth also has his hand in it.

The series HIER SPRICHT RADIO TYRUS conveys knowledge about the world of the Bible in a vivid and entertaining way. Supporters are radio journalists, some of whom otherwise report from leading positions in current affairs. The result is not Bible radio plays of a conventional kind, but historically very precise images of the times on the current state of research. The programme will be broadcast on Good Friday 1999 by the popular city radio station BERLIN 88 8 of the broadcaster Freies Berlin.