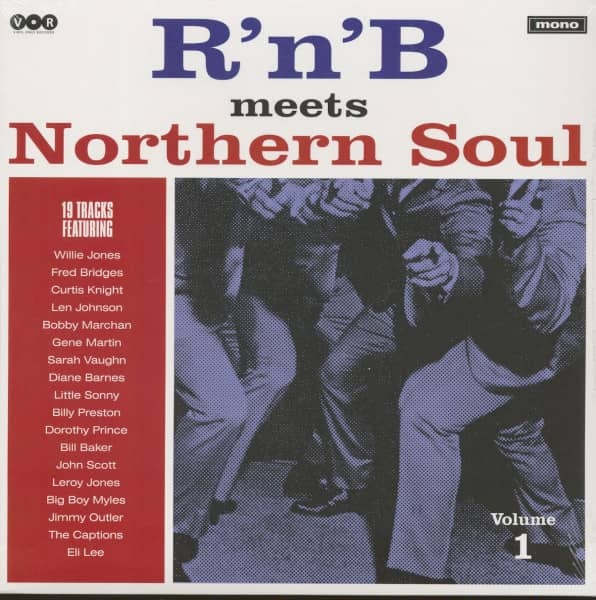 Britain's Northern Soul scene has steadily embraced other forms of relevant black dance music throughout its 40 year history. In the late sixties, rare Motown sound-a-likes more or less defined the may Northern Soul was meant to be. Since that point the scene has taken on seventies soul, eighties soul, near-funk, early style uptown soul, beaty pop, jazz soul, nineties soul, current releases all to a lesser or greater extent with various little splinter movements from those that wanted much more of the said style. Recent years have been a massive move towards what is known as R n'B an amalgamation of dance styled blues, hard soul (a Chicago ten-n meaning 'gritty raw sixties soul dancers) and early uptown soul. Such records as Charles Sheffield Its Your Voodoo Working' and Five Royales 'Catch That Teardrop have been amongst the very biggest records at all-nighters. As with every twist and turn there have been those that have been resistant to this introduction of a different dimension. yet I would say that these people are ignoring the very roots of Northern Soul.

In the same way that soul music in general evolved from the Blues then the roots of the Northern Soul scene originated in such clubs as the Twisted Wheel and the Flamingo in London's Wardour Street. By and large as the scene metamorphosed into an adrenalin powered largely up-tempo soul scene the earthy sound of the blues was left behind as it was in the music world in general in the late sixties. Occasional discs such as Bobby Bland's 'Call On Me' or Little Johnny Taylors 'Zig Zag Lightning' had the right overall feel to be included in play lists but basically through the seventies R'n'B was laid to rest.
The rebirth of Fin B on the Northern scene can be traced to London's 60s music scene which eventually found its home base at the 100 Club in Oxford Street and from its inception had featured an eclectic mix of soul related music that included Hammond instruments, blues and even some fifties Rhythm and Blues. When the Stafford All-nighter started playing the walking blues of Talkin' Woman by Lowell Fulsom and the latinized. uptown 'I Cried My Life Away by Tommy Navarro then the die was cast to add a new dimension to Northern Soul.

To this day argument rages over the extent to which R'n•B should be included on Northern Soul playlists. Some venues relegate the majority of the music to some satellite, smaller room whilst at the same time sprinkling the main room playlist with the most popular selections of the field. Only the most myopic of people cannot accept the essential soulfulness of much of the R'n'B music as applied to the Northern scene and we hope that this CD either converts you to a very worthy cause or provides you with the chance to own some of the rarer examples of the genre.
Tim Brown February 2005