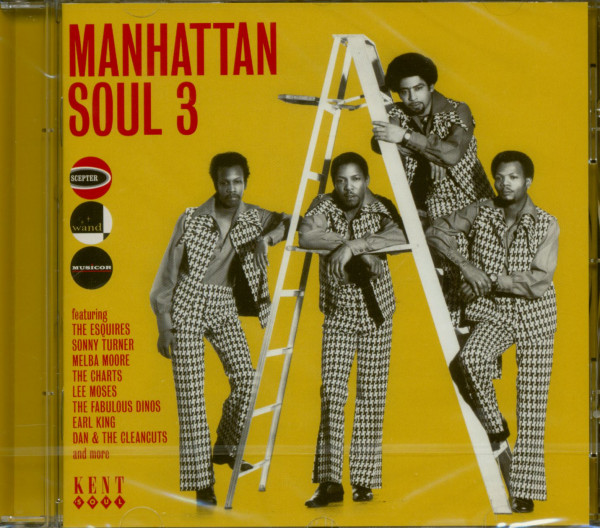 (2017/Ace) 24 tracks -Scepter/Wand and Musicor/Dynamo records were quintessential New York soul labels. Their common link was Luther Dixon, who set Scepter on the right road with the Shirelles and followed up with success for Tommy Hunt, Chuck Jackson and Maxine Brown. He split for Musicor in 1966 where he got the Platters, Tommy Hunt and Inez & Charlie Foxx back into the charts.

Scepter/Wand had the bigger black music catalogue and dominates this compilation. It is the third in the recent “Manhattan Soul” series: across-the-board soul covering the 60s and the first half of the 70s. A recent detailed book about those imprints by frequent Kent contributor Steve Guarnori has thrown the spotlight on the wealth of great material issued.

Kent’s privileged position of accessing the tapes has meant we can show how the labels’ recordings were even bigger than their sizeable output. This CD features a previously unheard early Chips Moman song from Helen Henry, the Shirelles’ take on Luther Dixon’s superb ‘Two Stupid Feet’, Van McCoy’s own interpretation of that group’s ‘What’s The Matter Baby’ and a previously unheard R&B group sound from the Tabs. Earlier vault discoveries from Junior Lewis and Big Maybelle are given their first CD outing.

R&B is provided by Billy Adams on a hip and raunchy nursery rhyme-themed number and the Soldier Boys, an early 60s doo wop super-group consisting of Wally Roker from the Heartbeats, Don Covay and John Berry from the Rainbows and Robert Spencer of the Cadillacs. Ex doo woppers Brenton Wood and Harold Hopkins demonstrate how pop-soul should be sung.

Rare vinyl is represented by beautiful ballads from Sonny Turner with ‘Now That You’re Gone’, Billy Byers’ ‘Remind My Baby Of Me’ and Dan & The Clean Cuts’ ‘Open Up Your Heart (And Let Love In)’. The Charts’ ‘Nobody Made You Love Me’ and the Fabulous Dinos’ ‘That Same Old Song’ are now expensive dance tracks and the Esquires’ glorious ‘How Could It Be’ is currently enjoying many DJ plays on the rare soul scene.

Late 60s, gritty, southern funk comes from the New Orleans Johnny Moore aka Deacon John Moore and the highly regarded Lee Moses. The subtler sound of the south is heard in Earl King’s overlooked slowie ‘A Part Of Me’. Similarly neglected is Melba Moore’s pretty ballad a la Dionne ‘Does Love Believe In Me’ and Tommy Hunt’s ‘Lover’ a super song sung over the ‘Any Day Now’ backing.