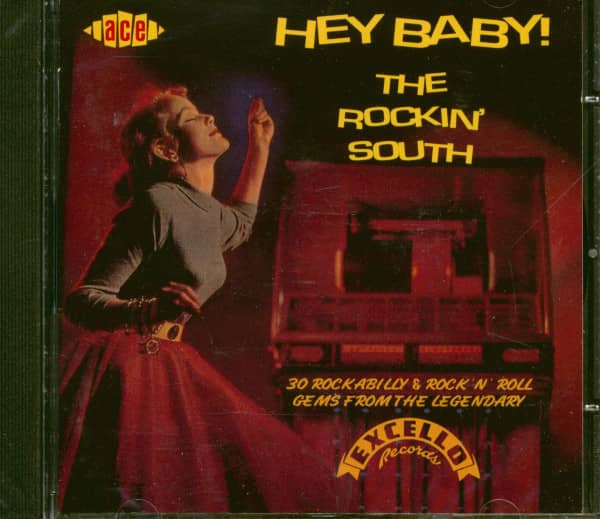 The release of Hey Baby!- The Rockin' South represents a remarkable excavation of the Excello vaults. Much of this music has not been available since the original 78s and 45s were released in Nashville in the 1950s.

Little has been reissued on CD, or for that matter vinyl. This is not obscurity for obscurity's sake. Many of the original tapes were lost, recorded over or not returned by the pressing plants. For the first time, the missing masters have been reconstructed from the rare records of collectors in England, Massachusetts, Texas, Tennessee, California and beyond. It is surprising just how few of these records exist and the search was as exhaustive as it was exhausting. And with the latest technology at hand, the engineers at Sound Mastering did a sterling mastering job.

Excello is renowned as a blues label. In the early to mid-50s, however, there was a wide variety of southern music released, including gospel, hillbilly, western, even outright pop and rockabilly. The sister Nasco label from '57 to '60 was more pop-oriented, but still had a healthy ration of rock'n'roll. Hey Baby!- The Rockin' South kicks off with Al Ferrier's title track, a classic slab of rockabilly.

After another quintessential rockabilly performance by Jackson Toombs, we revert to the charming hillbilly/neo-rockabilly sounds of the Lindsey Brothers, Ray Batts and Don Haggard & The Sunset Drifters. The Excello segment is concluded with the only black artist here, Slim Harpo's best rocker Bobby Sox Baby.