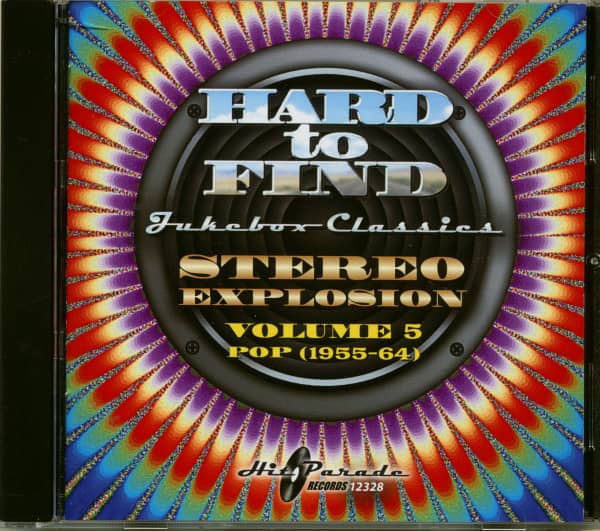 Vol. 5 of 5 (so far) in a series of Hit Parade compilations: "A STEREO EXPLOSION" comes to your hi-fi system with this oldies spectacle, with almost all tracks making their stereo debut!

Each disc in this series contains 28 or more ORIGINAL HITS, most of them in stereo for the first time, with top-notch sound production by Mark Mathews & Walt Weiskopf, a 12-page booklet with photos and track-by-track liner notes, and the superb level of quality and attention to detail that have made the Hard To Find Jukebox Classics series popular with collectors worldwide.

"These 29 tracks are now in glorious, state-of-the-art 21st century stereo, with almost all of these songs making their stereo debut, such as "Teen-Age Idol" and "Young World" by Rick Nelson, Chubby Checker's "Pony Time" and Freddy Cannon's "Way Down Yonder In New Orleans." "The Lonely Bull" by the Tijuana Brass makes its stereo single debut. Ben E. King's "Spanish Harlem" is featured in a great new balanced stereo mix, along with excellent remixes of two 4 Seasons classics.

Also included are the stereo debuts of Ray Charles' #1 R&B hit "I've Got A Woman", Ronny & The Daytonas' "G.T.O." and Sandy Nelson's two drum spectaculars, "Let There Be Drums" and "Teen Beat". "