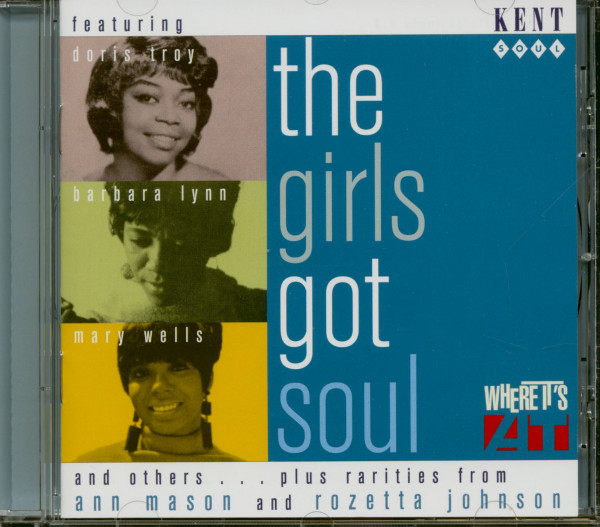 ((Kent Soul) 25 tracks Atlantic 1960-69 with 12 page color booklet - great compilation featuring classics, rarities und unissued tracks.
-
David Nathan, also known as the 'British Ambassador Of Soul', has contributed the detailed notes for this various artists CD, the latest in our series of compilations drawn from the Atlantic group of labels. As he observes, With the dawning of the 60s, the strongly R&B-oriented diskerie became a hot bed for a diverse range of female stars. As the decade continued, Atlantic Records and its various imprints (such as Atco and Cotillion) could justifiably lay claim to being the premier outlet for some of the most soulful women to ever hit the recording studios. And so it is that The Girls Got Soul attempts to provide a selection of some of the best female soul recorded for Atlantic during the 60s. That's a tall order and it's why it will take another CD as well in this series (the upcoming Big Town Girls) to do justice to the girls on Atlantic.

Ranging from firm UK favourites such as Betty Lavette and Doris Troy, through stalwarts such as Ruth Brown and LaVern Baker-.-onto soul superstars such as Aretha Franklin, Mary Wells and Barbara Lynn, the 25 tracks in The Girls Got Soul feature 15 different acts. So there's room as well for the relatively obscure and a touch of unreleased material too. In the former category there are both sides of the sought-after Rozetta Johnson Atlantic single as well as Ann Mason's answer record to Wilson Pickett's In The Midnight Hour. In the latter there's a Barbara Lynn track from the vaults Unloved, Unwanted Me and the little-heard Doris Troy track But I Love Him.

Atlantic Records used a rich selection of arrangers and producers during this period and we get to hear a number of their efforts. Bert Berns was responsible for Little Esther's Hello Walls and LaVern Baker's Here He Comes - Carl Davis along with Sonny Sanders for Mary Wells' fantastic Dear Lover and Me And My Baby, whilst Tom Dowd and Tommy Cogbill are behind the Sweet Inspirations tracks. I-T-T Production stands, of course, for Ike & Tina Turner and they were behind the Ikettes' I'm Blue (The Gong-Gong Song), indeed that's Tina singing with them. Representing her successful four year stint on Atlantic, Barbara Lynn's sides include the soulful (Until Then) I'll Suffer, the up-tempo classic Take Your Love And Run, and there's a remake of her Jamie hit You'll Lose A Good Thing. As on Jamie, her material was produced by Huey Meaux.

As David Nathan concludes: 'Having so many wonderful sides recorded for Atlantic and its imprints all on one collection is one of the ongoing perks that us diva devotees get as a result of the CD revolution that began nearly twenty years ago'. (Peter Gibbon)