Vocalist Al Thomas was born in Chicago's south side, in the Maxwell street area. It wasn't until the mid-80s that he started to work on a regular basis, with the Crazy House Band. Little known outside his hometown until the release of his 1999 debut, he made an appearance at the 'Lucerne Blues Festival' 2000. Recordings from his shows are now available on CrossCut's 'In The House' series. He sings in the style of Junior Parker, Bobby 'Blue' Bland or B.B. King . The band's repertoire consists mostly of cover tunes, but Thomas and the band know how to re-make them into their own style. This album is also featuring the great guitar of John Edelmann who's now fronting his own band in Florida. 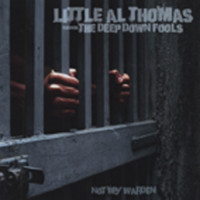 Tracklist
Thomas, Little Al - In The House - Live At Lucerne Vol.3 CD 1
01 Introduction by Fritz Jakober
02 Somebody Changed The Lock On My Door
03 Feel So Good
04 Bad Luck Baby
05 You're Breaking My Heart
06 Just Like A Fish
07 Sweet Sixteen
08 Memphis Girl
09 Feel So Bad
10 Nobody Sleepin' In My Bed
11 I Gotta Find My Baby