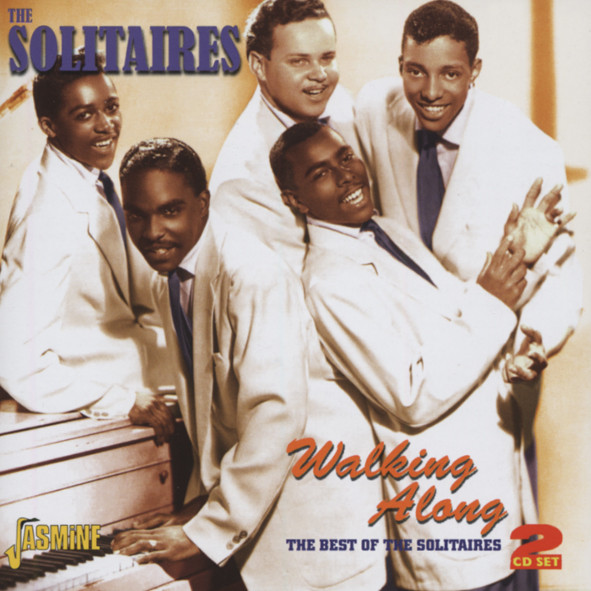 SOLITAIRES: Walking Along - The Best Of (2-CD)

Article properties: SOLITAIRES: Walking Along - The Best Of (2-CD)

When we last checked in with The Solitaires on our 1954 collection, they were a promising young Harlem group newly signed to Hy Weiss' fledgling New York-based Old Town Records. Their first Old Town platter, pairing Wonder Why and Blue Valentine, was followed by Please Remember My Heart, I Don't Stand A Ghost Of A Chance, and a stately The Wedding, establishing the quintet as the label's flagship group. Ballads were their unabashed specialty.

Lead tenor Herman Curtis (aka Herman Dunham, formerly with The Vocaleers), had been drafted in 1955. He was replaced by former Concords lead Milton Love, born July 8, 1937 in Chatham County, North Carolina. Otherwise the lineup was similar to the group that signed with Old Town: tenor Winston 'Buzzy' Willis, second tenor/baritone Bobby Baylor, bass Pat Gaston, and former Mello-Mood Monteith 'Monte' Owens on tenor and guitar. All five penned the relentless Walking Along, an untypical up-tempo release cut on October 10, 1956 and issued on Old Town in January of '57. Love fronted the number, powered by a foot-stomping beat. Gaston had joined the Air Force, so Freddy Barksdale took over on bass.

Although Walking Along didn't chart nationally (the Curtis-led ballad Please Kiss This Letter , cut back in January when he was still with the group, adorned the flip), it stirred up plenty of dust on the East Coast. In the autumn of '58, those cover-obsessed Canadians, The Diamonds, got around to covering Walking Along and enjoyed a #29 pop seller. That was enough to interest Leonard Chess in picking The Solitaires' original version up for convenient comparison on his Argo subsidiary.

The Solitaires continued to record into 1960. I Really Love You So, their followup to Walking Along, was another bubbly rocker with Curtis back in harness, though Willis and Baylor were drafted the year before (two ex-Fi-Tones, Reggie Barnes and Cecil Holmes, were their replacements). Love spent 1961-63 in the Army. Their fans never suspected that The Solitaires weren't recording for Old Town anymore as Weiss released product on the group into 1963. Love and Willis were back for '64 one-offs on MGM and Roulette, the latter as by The Chances.

Willis later landed front-office positions in the R&B divisions of RCA (where he supervised the production of The Main Ingredient's '72 gold record Everybody Plays The Fool) and Polydor. Holmes worked as a promo man for Buddah before joining Neil Bogart as one of the owners of disco-dominated Casablanca Records. Baylor died of pneumonia in January of '89.