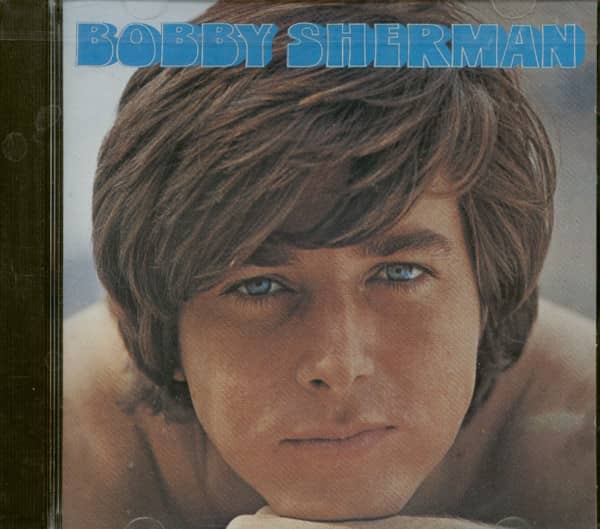 (K-Tel) 11 tracks
Robert Cabot Sherman. Jr., better known to his countless fans as Bobby Sherman (or Jeremy on TV's "Here Come The Brides) is fast becoming one of today's hottest new recording stars. Not since the early days of the Beatles has any recording artist received such widespread enthusiasm. "Little Woman." his first single for Metromedia Records, was a smash hit in all parts of the country. At recent personal appearances. Bobby was besieged by his eager and loyal fans. In the inimitable pop style of a few years back, Bobby lost his jacket and many strands of hair while trying to make his exit.

Only four years ago, Bobby was a high school football star and engineering student who spent his spare time composing songs, producing records, experimenting with different techniques and performing at parties. Bobby is not only a most capable singer, but also plays sixteen musical insturments. At one of the parties, Bobby was "discovered." A television audition followed and a few weeks later Bobby was signed to do a show called "Shindig." For two years Bobby was the star of this weekly musical show and it was at that time that he started to develop his large following of fans. His fan mail outnumbered that of any other performer on the entire ABC network.

Now Bobby leads a multi-faceted life, enjoying phenomenal success as both a television actor and recording star. His first album, simply titled "Bobby Sherman" shows just why his recording career is skyrocketing. Featured on this album is Bobby's hit single "Little Woman" along with such pop classics as Dylan's "One Too Many Mornings," Bacharach-David's "This Guy's In Love With You," and "A Time For Us," the love theme from the movie "Romeo and Juliet." Also of note are two of Bobby's own compositions "Love" and "Time" as well as his rendition of a song called "Seattle," the theme song from Bobby's TV show "Here Come The Brides." Born under Leo, the sign of entertainment, Bobby Sherman's planets must be in just the right place these days — and "It couldn't happen to a nicer guy."