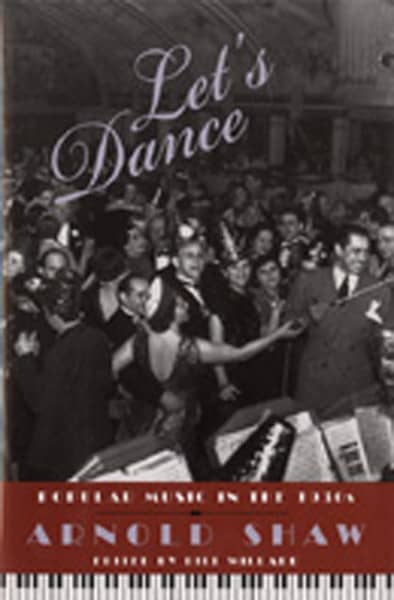 English, Closebound, Gebunden mit Schutzumschlag, 16x24 cm, 242 pages ; In this exuberant sequel to his prize-winning 'The Jazz Age', Anorld Shaw captures virtually every aspect of popular music during the Depression. Here is a colorful year-by-year chronicle of music in the '30, blended with chapters on broader topics - the jazz clubs on Swing Street, the Big Band boom - and spiced with interviews with major figures (such as Burton Lane and Lionel Hampton), who bring a vibrant first-hand feel to the narrative. Readers visit every corner of the music scene. We watch as the Hollywood musical takes off, highlighted by the brilliant Busby Berkeley and the luminous partnership of Fred Astaire and Ginger Rogers. We read about the incredible popularity of radio shows such as 'Your Hit Parade' and Martin Block's 'Make-Believe Ballroom', which brought music to households from coast to coast. And we experience once again the great Broadway musicals of the period - from 'Girl Crazy' to 'The Cradle Will Rock' - written by a who's who of American song: Jerome Kern, Irving Berlin, George Gershwin, Rodgers and Hart, and Cole Porter. But above all. the '30s were the Swing Era - when swing bands dominated dance halls, ballrooms, radio broadcasts, and record sales - and Shaw provides superb portraits of Benny Goodman, Duke Ellington, Glenn Miller, Count Basie, Tommy Dorsey, and countless others. From Gershwin's 'Porgy And Bess' to Disney's 'Snow White And The Seven Dwarf', from Woody Guthrie to Ethel Merman, and from the Carioca to the Lindy Hop, here is an affectionate and informative account of this golden era of popular song.