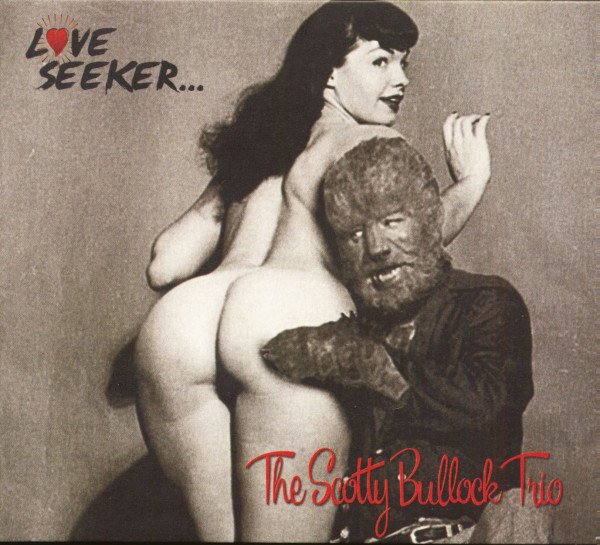 A band under the influence of musical "narcotics" like Beat, Surf, Rockabilly, Country & Western, Rock as well as a small pinch of Punk set out at the beginning of 2015 to process these well-known elements into a highly spicy mixture, which has it in itself. Guaranteed free of electronic additives. Following the tried and tested motto 'Less is sometimes more' and despising musical fears of contact, the Scotty Bullock Trio climb the boards that mean the world and drive the audience into paranoia with growing enthusiasm.

"The Fleet Trio" serves the listeners without detours sounds from a time when rock music, which had not yet been invented, stood in the starting ramps and could hardly be stopped to start high into the stratosphere of madness. With their debut album "Love Seeker", this trio Infernale now pushes full throttle through the often uniform music landscape to set themselves apart from it. 13 thrilling songs loaded with high-octane beats tell what the three guys are so occupied with. Bandleader, singer and guitarist Scotty Bullock doesn't only master the "Twang", also the songwriting of most songs goes back to him. Memphis Trucker" is a tribute to the most famous and probably the greatest Rock'n'Roll performer of all times, whose 40th anniversary is on August 16th, which the band calls their "patron saint" and whose guitarist was also called Scotty. Felix Wenz (Vocals/ Pro & Contrabass) and Harry Weber (Vocals / Drums) complement Scotty perfectly to a trio and perform live and in the studio several jewels of the Rock'n'Roll history, from Link Wray, Jerry Reed to "His Bobness" Dylan.

A stylish video clip was shot for the hooky "Hipster!", the remix version concludes this album as a bonus track. On a word about the cover: Wolfman, who is actually antiquated for a long time, but has become hip again in the course of the never ending "Vintage & Old School" boom, the role of "Love Seeker" is written like on a furry body. Bettie Page, the Grand Madame and Pinup icon of the Rockin60ies does the rest. It's hard to imagine what such pictures triggered in a still prudish time, when the youth got a tool with Rock 'n' Roll to finally free themselves from dusty views and the widespread "Das tut Man doch nicht! And even today, the opinions of the "serious people" are still divided at the sight of a naked woman's behind. Love Seeker... isn't everybody seekin for love somehow?