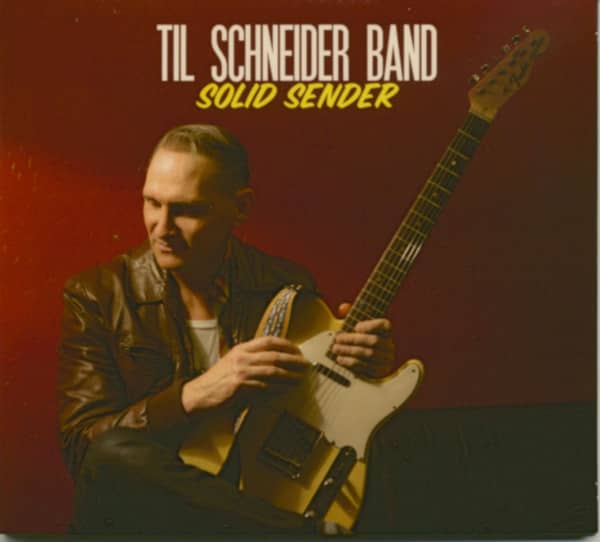 (Belmont) 14 tracks.
Some high octane guitar spanking, greasy organ grooves and a beat so funky it's barely legal. Bluesenthusiasts, jazzpeople and music lovers of all shapes and colors, look no further. This band got all the good stuff you need!

On their debut 'Solid Sender' the trio around guitarist and singer Til 'Guitar' Schneider presents a honey-thick mélange of genres and styles within the Blues, spiced up with some sweet and gritty flavours of Jazz, Soul or Rock'n'Roll and a few real cool, funky tricks of their own. Well-hung, handmade and aimed for the heart. All played from the gut and with impressive delicacy and great finesse; stretching the boundaries without loosing the soulfulness or sacrificing the pure unadulterated feeling of the Blues.

In a way the Til Schneider Band has a real old school approach to music: Just get several musicians in a room together, let them play and capture a moment. Everybody brings his very best to the table. Organplayer Gero Koerner contributes all his virtuosity and musical versatility while drummer Benedikt Hesse gives it that loose, funky New Orleansflavour that we all wanna hear. On top Til „Guitar“ Schneider let's his Tele sing, cry and gently weep. And although these cats have all this jazzy, improvisational skills, the songs are still the heart of their music. Most of them self-penned by bandleader Til Schneider and presented with his relaxed, warm baritone voice.

Known as one of europe's finest bluesguitarplayers, Til Schneider is touring with Ray Collins Hot Club all over the world, playin all the major blues- and rock'n'roll-festivals such as Viva Las Vegas (USA), Rhythm Riot (GB), Moulin Blues Festival (NL) or Lahnstein Blues Festival (GER). As a sideman he played with such greats as Mike Sanchez, Andrew Wiliams, Charlie Gracie or saxophon legend Big Jay McNeely. Just to name a few. Now, with the Til Schneider Band, he can show his talent as a singer and songwriter as well.