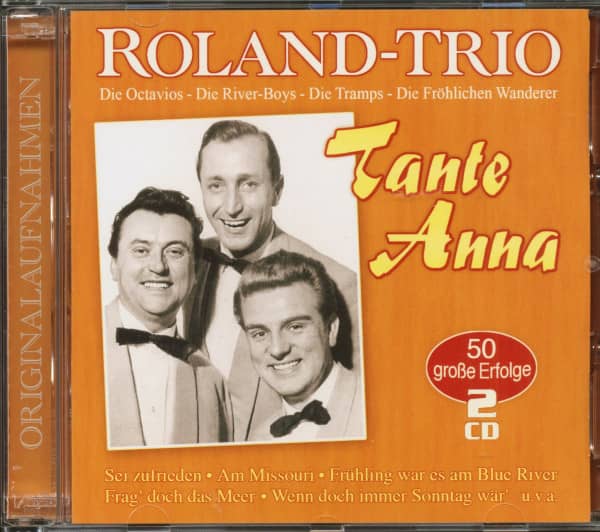 (Music Tales) 50 Tracks, 1954-1962
In 1954 a first record accompanied by Margot Eskens was released. Further recordings followed as choral accompaniment for Liselotte Malkowsky and Richard Germer. In 1954 the first records were released under the name "Das Roland-Trio". After a whole series of singles under various names (including Die fröhlichen Wanderer, Die River-Boys, Die Octavios, Die singenden Waldmusikanten and others), the Roland Trio achieved its first own charter success in 1956 with the title 'Tante Anna'.

Another success was her version of the hit 'Sei zufrieden' which was one of the most played titles in 1956. Together with Knut Kiesewetter the three singers had two bigger successes as 'Die Tramps' with 'Am Missouri' and 'Komm nach Idaho'. As 'The Octavios' they accompanied together with the 'Cyprys' the young Udo Jürgens with his first charter successes. Curth Stephan and Richard Gatermann had a top ten hit as "Tom und Tommy" with the title "Eine Handvoll Heimaterde" (1959, 9th place). Some more releases followed until the Roland-Trio dissolved in the middle of the 60s.