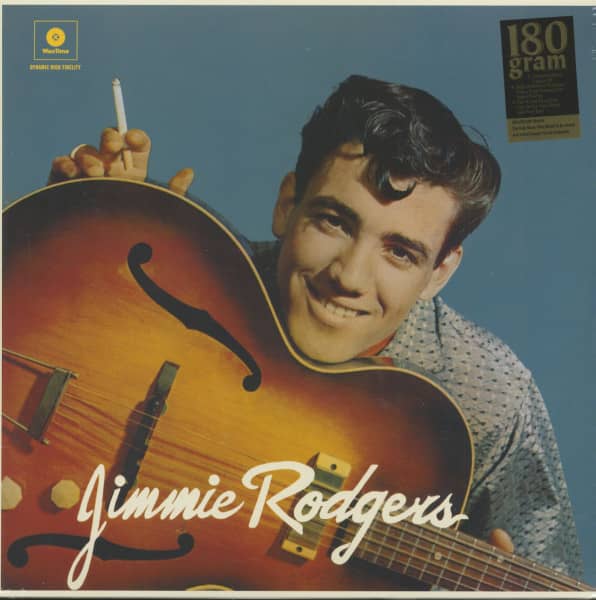 (Waxtime) 14 tracks
Not to be confused with the legendary countrysinger by the same name, Jimmie Rodgers (sometimes billed as Jimmie F. Rodgers) was a versatile vocalist whose warm, inviting style lent itself to rock & roll, folk, country, vocal jazz and easy listening styles. Born in Camas, Washington. on September 18, 1933, he was successful front 1957 to late 1967, when a violent incident derailed his career. (While driving home from a Christmas party, he was pulled over by a car he thought belonged to a friend. An assailant brutally beat Rodgers and left him with a severe skull fracture that had to be repaired with a metal plate.)

While his biggest chart hits like 1957's 'Honeycomb,' 'Kisses Sweeter than Wine' and 'Oh-Oh, I'm Falling in Love Again' were definitely built for pop success, Rodgers was essentially a folk & roll artist at heart. The early publicity hype called him 'a cross between Elvis Presley and Burl Ives,' though his style was more akin to Buddy Holly's than to Elvis'.
This special LP release includes his celebrated self-titled debut album, Jimmie Rodgers , which was originally issued by Roulette Records in 1957 and has been long unavailable on vinyl. Here you will find folk 8, roll favorites such as the aforementioned 'Honeycomb' the song went all the way to number one on the Billboard pop charts), 'Kisses Sweeter than Wine,' 'Water Boy,' and 'Hey, Little Baby' In addition to the original album, this WaxTime collector's LP also contains 2 bonus tracks from the same period, 'Bo Diddley,' and the beautiful 'Find the Girl'.
Gary Blailock