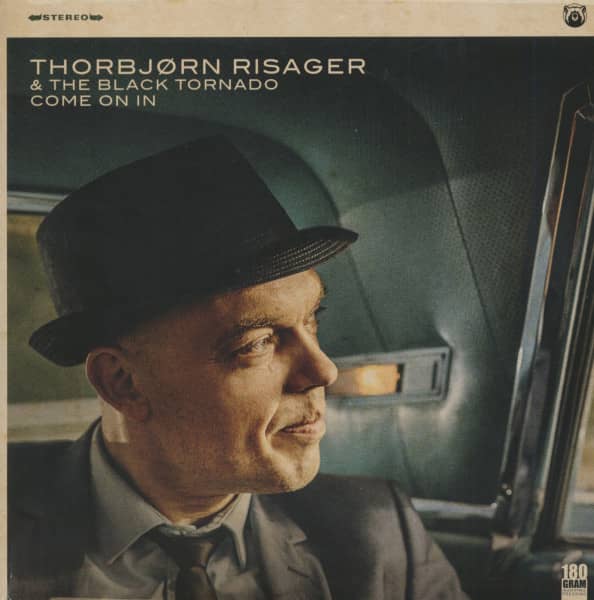 The popular and award-winning band is launching a new album: "Come On In". Intense as usual, it also leaves room for melancholy. In over 1,000 concerts in 21 countries, this dynamically swinging and highly praised formation has made the audience smile and dance. Because that's what the Blues can do: drive away the problems of life with its grooves. The frontman knows this better than many others, and on the tenth album - with its inviting title "Come On In" - he tackles topics such as his own age or political reality.

In this sense, the title symbolises everything that Thorbjørn Risager & The Black Tornado stand for. Thorbjørn comments: "Some people think the blues is sad because it is named after the colour of melancholy and originated from the music of slaves in the USA. But you have to remember that this was music that people gathered to when they wanted to forget the hardships of their daily lives. The blues was played on festive occasions and was dance music. And I would like to continue this tradition: to make your problems more bearable through our music, so that you can go home with a smile on your lips."

In 2019, the musicians will still be working in the same way they started. Thorbjørn Risager sits at home with his acoustic guitar and develops the basic structure of a song before they go into the studio, where the others make suggestions for grooves, bass lines, brass sections, background vocals or fills. All this results in a sound that makes you feel like everything was about Risager's voice.

Her undogmatic and innovative approach to the blues combines it with elements from other genres like funk, gospel, soul or rock'n'roll. It all depends on the feeling and direction of the song. The melancholic songs with acoustic guitar contribute a further nuance to the new album. This is instinctively so, as his blues reflects here where Risager currently stands in his life.

"The blues gives me the opportunity to let off steam. And this time I wrote some songs about my doubts whether I did everything right in my life. However, my songwriting is also always about the light at the end of the tunnel. which is gritting your teeth and saying, "I'm just gonna keep on doing it."

"Never Givin' In" is just such a song, while "Last Train" is about the problem of being too self-absorbed. "Nobody But The Moon" shows Thorbjørn Risager's rarely articulated political side when the question is asked: Who saw the children who drowned in the Mediterranean, and who heard their screams? To which the answer follows: No one but the moon.

For all its seriousness, the title song "Come On In" emphasizes the uplifting sense of community that Thorbjørn Risager & The Black Tornado want to create. This is about a bar where everyone is welcome, and Risager wrote the song with Copenhagen's Mojo Blues Bar in mind. Because: "That's where we grew up, and many of us met our girlfriends there."

Some bands make a breakthrough and that's it. Others give up when success doesn't come fast enough. And then there are those who put their heart and soul into making music and who are constantly gaining popularity by maintaining their high standards over time. This last category also includes Thorbjørn Risager & The Black Tornado. Both in Denmark and abroad, people are becoming increasingly aware of the explosiveness of their concerts, in which guitar, bass, drums, organ and brass circle around Risager's powerful voice, which has already inspired critics to make comparisons with Ray Charles and Joe Cocker.

Thorbjørn Risager has had the blues in his blood since he was ten years old when he heard something absolutely magical for him. At his home in Jyllinge his parents, who both taught music, only played classical records, but in the house next door a new world opened up for him. Thorbjørn was still too young to understand the roots of this music, all the misery and great pain, but also the euphoria of singing it out of your throat. All he knew was that he had to take it home with him. So he got tapes of this exotic music and for years he fell asleep to the sounds of Fats Domino and Muddy Waters.