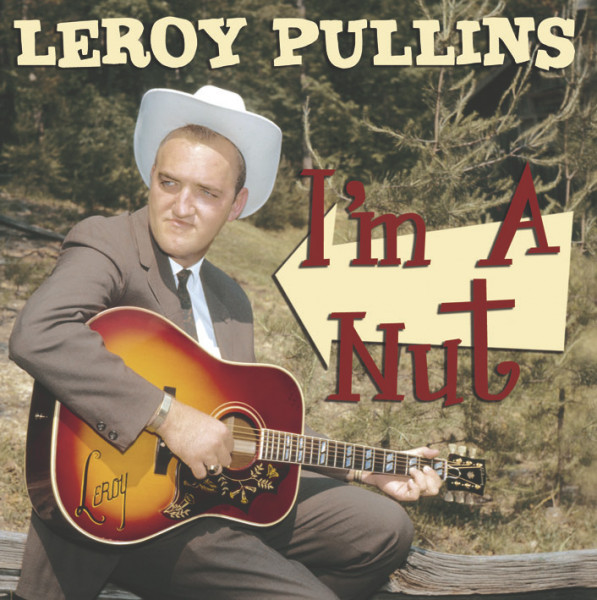 1-CD with 16-page booklet, 27 tracks, playing time 64:26 minutes.
Bear Family was the first to reissue the wacked-out recordings of Leroy Pullins on LP, and now they're coming to CD.
All Roger Miller fans will love Leroy Pullins.
Includes Leroy Pullins' hard-to-find 1966 Kapp Records smash I'm A Nut plus every other recording he made, including previously unissued sides.
Many years ago, Bear Family issued an LP of Leroy Pullins' Kapp recordings. Long out-of-print, that LP created a steady demand for his recordings on CD. To date, nothing has been released on CD, not even his 1966 pop and country smash hit I'm A Nut. Now Bear Family rectifies that situation, reissuing that original LP plus every other recording we could find by Leroy Pullins, including previously unissued sides.
The success of Roger Miller in the mid-1960s led others to work in his style, but no one except Leroy Pullins really managed it. The same offbeat humor, the same undercurrent of darkness and weirdness and social commentary. A minor classic.

Learn more about Leroy Pullins
Leroy Pullins Comedy has long played a part in the mainstream of country music. In the... more
Close menu
"Leroy Pullins" 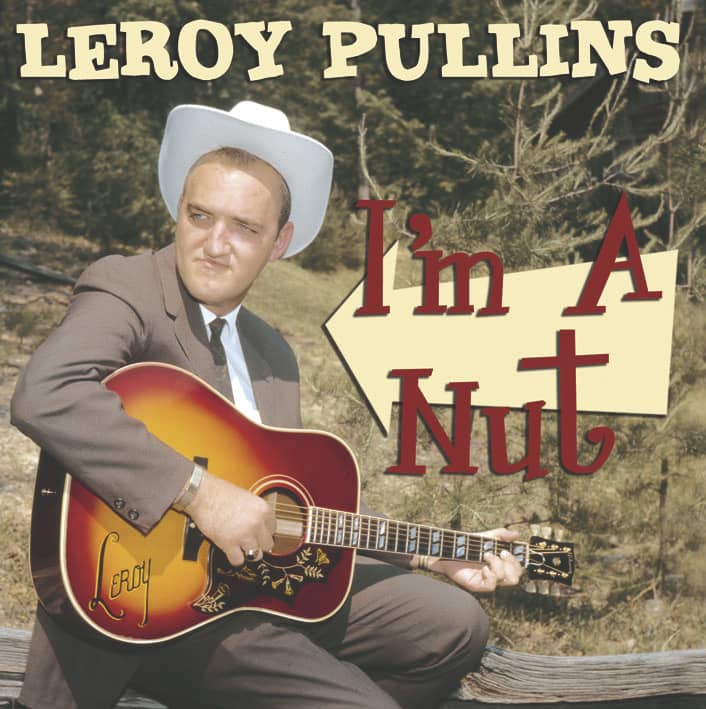 Comedy has long played a part in the mainstream of country music. In the earliest days of the Grand Ole Opry, humor ― in song and in the stage routines of seasoned vaudeville performers like Uncle Dave Macon ― was an essential ingredient.

The heyday of the comedic country song was, arguably, in the 1960s. This was when Ray Stevens was coming into his own with sublimely ridiculous moments of musical history like Ahab The Arab; and Roger Miller (who won an unprecedented 11 Grammy Awards in 1964 and 1965) was a ubiquitous presence on the national music scene with off-the-wall vignettes of humor like Dang Me and Chug-A-Lug. This was also the era in which Leroy Pullins came of age musically and made his brief appearance on the national charts.

When it came to the sublime art of extolling the ridiculous or cloaking a profound message in a veil of broad, knee-slapping humor, Leroy Pullins was clearly one of the masters. He could hold his own, spin and sing a good comic yarn, and raise a barn-full of belly laughs right along with the best of them. Even when his deepest intent was nothing more than inducing mere guffaws in the hearts of listeners (as with I'm A Nut or Swimming At The Bottom Of The Pool), his lyrical sophistication was nearly unparalleled. His ability to compose or deliver tongue-twistingly complex lyric constructions (as in Gypsy Rose And I Don't Give A Curse), and his knack for delivering a musical punchline with uncanny timing (Billy Boy And Jackson Sam), as well as his ingenious flair for bizarre vocal effects (Knee Deep and Okeefenoke) reveal that an incipient comic genius was at work here.

Undeniably, the influence of Roger Miller is palpable in much of Pullins' work. Yet, as both a writer and singer, Pullins displays a repertoire of unique comic flourishes in these songs that was clearly all his own.

Listen, for instance, how a seemingly deadly-serious gunfighter ballad like Billy Roy And Jackson Sam suddenly shifts gears and ends on a sardonically comic note that catches listeners completely by surprise. Take notice also of the subtle dexterity with which he builds the dramatic tension as the song's verses progress and creates a darkly portentous mood.

Though Pullins was not a great country vocal stylist in the tradition of a George Jones or a Merle Haggard, his rough-hewn voice has an ingratiating, almost conversational familiarity to it. This relaxed, unaffected style of his served him well, not only on his flights of musical tongue-in-cheek and full-blown hilarity, but also on a tender love ballad like I Love You Drops.

Like all first-rate musical comedians, a subtlely-wrought message of homespun wisdom (as in Knee Deep and Out In The Smokehouse Takin' A Bath) or wry social commentary (Tatersville Women's Auxiliary Sewing Circle ― which, with its precise imagery and well-drawn narrative structure, is reminiscent of Tom T. Hall's finest work) often lurks just beneath the surface of Pullins' rib-tickling, knee-slapping musical repasts.

Listening to these songs, it is almost impossible for one not to get caught up in the unabashedly mirthful and down-home musical world of Leroy Pullins. His songs have a humor and charm about them that is timeless.

With the release of 'I'm A Nut', this new Bear Family collection, the long-overlooked comic genius of this unique singer-songwriter-comedian has gotten a well-deserved second hearing.

When Bob Allen wrote his brief text accompanying Bear Family's 'I'm A Nut' LP more than twenty years ago, he didn't know that Pullins had died just a year or two earlier. If nothing else, Pullins had done a good job of hiding his tracks once he'd decided to get out of the entertainment business.

Carl Leroy Pullins was born in Berea, Kentucky on May 12, 1940 to Cecil and Eva Pauline Pullins. He began writing songs when he was twelve. Aged nineteen, he formed a rock band, the LeSabres, who were joined by fourth-grader Jimmy Pennington. "They took Berea by storm," said Jimmy's mother, Lily May Ledford Pennington (formerly of the Coon Creek Girls for those up on early country radio). Jimmy Pennington left around 1963 to form a band called the Exiles, who became both pop and country stars after they changed their name to Exile.

Exile's fame was in the future, but Pullins probably knew very well that Red Foley had left Berea, Kentucky to find fame, fortune, and much else in the country music business. And so he decided to drive south to Nashville in search of fame, fortune, and the whole damn thing. He arrived when everyone was in awe of Roger Miller's success. Every label needed someone who could work in that quirky, offhandedly humorous style, and Pullins could. Industry veteran Paul Cohen, who had produced Foley for Decca, was running the Nashville division of Kapp Records in 1966, and signed Carl Leroy Pullins, calling him Leroy Pullins...probably because that sounded a little funnier than Carl Pullins. The conduit to Cohen was Kapp artist Billy Edd Wheeler and his producer, Bob Lissauer. "I worked with Leroy Pullins closely, got him to work on improving a few of his songs to get a collection ready for an album," says Billy Edd. "Bob Lissauer and I produced his album in Nashville, and we co-published the songs. Leroy was a friend, an uneducated country boy from Berea, Kentucky, but very witty and loved to joke and tell jokes. Somewhat like Roger Miller, he had an unusual slant on life. His songs testify to that."