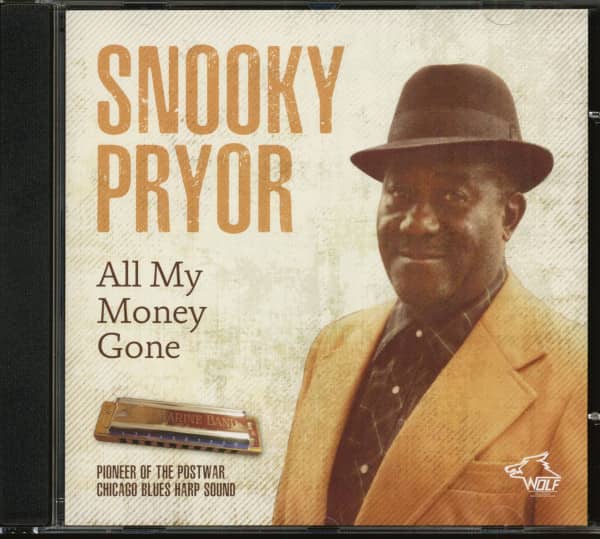 Snooky Pryor and His Trio

Snooky Pryor and His Trio

Even before Little Walter revolutionized the role of the harmonica on the postwar Chicago blues scene with his astonishing solos, Snooky Pryor was amplifying his harp on Maxwell Street. Born September 15, 1921 in Lambert, Mississippi, James Edward Pryor began playing as a youth (Jimmy Rogers was a childhood buddy). 78s by Blind Lemon Jefferson, Charley Patton, and John Lee Williamson caught his ear, but Sonny Boy #2 knocked the lad for a loop. As he watched Williamson blow his harp on the streets of Vance, Miss., Pryor knew what he wanted to do with his life.

"An old clothing store had burned down in the town where I lived at. There was an old big money chest in there, in what was left of the store. And he used to stand up on that old money chest and play his harmonica. People would be giving him money. I liked that from a kid. I always did want to play harmonica, and that was my start there," said the late Pryor. "I think he was about one of the greatest harmonica players that ever lived."

Pryor started amplifying his harp in the early '40s while serving his country. "I was in the South Pacific, in a little place called New Caledonia," he said. "I got to be a bugler boy, on account of my music. I used to blow the calls, taps and stuff like that. After I was through with my calls and things, then I would take my harmonica and come through this big p.a., this big Army p.a. It sounded like a saxophone to me.

"After I was discharged out of the Army back in Chicago on November 16, 1945, that's when I went down on 504 South State Street. I never will forget it. That's where I picked me up a p.a. system with two speakers and a little mic that looked like one of these old-time snuff boxes. And I went to Maxwell Street with it. That's when the big sound started," he said. "People were surprised to hear a harmonica sound like that, so much noise!"

Teamed with cousins Floyd and Moody Jones (Floyd gave the harpist his 'Snooky' moniker), Pryor played on Maxwell Street, leading to Snooky and Moody's debut 78 for the Planet label in late '48. "There was a guy that had a radio shop and records and stuff like that all together. His name was Chester Scales," said Snooky. "By me getting out of the Army, he told me I was so good, asked me, did I want to make a record? Well, you know, at 24 years old, sure! I'd have done anything to get on record then." In early 1950, Pryor made a J.O.B. single, encored in '52, and in late 1954 blew amplified harp on his lowdown J.O.B. release Cryin' Shame at Universal with Eddie Taylor manning one guitar. Pryor then made mid-'50s singles for Parrot and Vee-Jay. "That was nothing but small labels," said Snooky. "By me young and dumb and wanting to record so bad, I just went on and took a chance with 'em."

The blues lost their allure for Pryor at one point during the '60s, but he came back stronger than ever, recording prolifically in the 1990s and right up to his October 18, 2006 death. He remained adamant about who first amplified a harmonica in the Windy City. "They want to say Little Walter amplified the harp, but that's a lie," he said. "When I did that, Little Walter was still in Louisiana shooting marbles!"