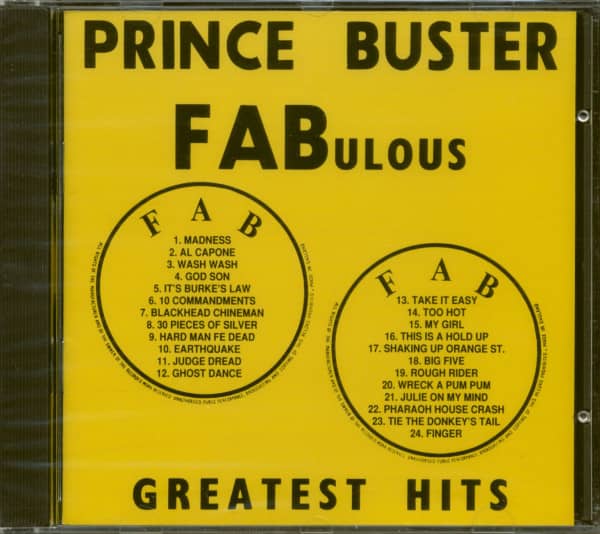 Prince Buster, born in Kingston, Jamaica on May 28, 1939, achieved local fame as a boxer and deejay before escalating into national prominence with 'Wash Wash' and 'I Feel The Spirit' in 1962. A front-runner of the bluebeat craze, he pio-neered ska on '30 Pieces Of Silver', 'The Lion Roars' and `Sammy Dead' (adopted by Chelsea FC as their anthem in 1964). Always as popular with white British youth as with the Jamaican audience, he was first a hero of the mods in 1964 and later achieved similar status amongst their skin-head counterparts, during the brief rock-steady period, with rude boy litanies 'Judge Dread' and 'Ghost Dance'; un-abashed sexism on 'Ten Commandments Of Man' and 'Big Five'; and straightforward cowboy/gangster deifications with 'Al Capone' (a British chart entry in April 1967) and `Lawless Street'. A prolific songwriter and recording artist — issuing over 200 singles — Buster invariably employed the best session musicians as his 'Blues Busters' rAll Stars', including the Georgie Fame Band on occasions.