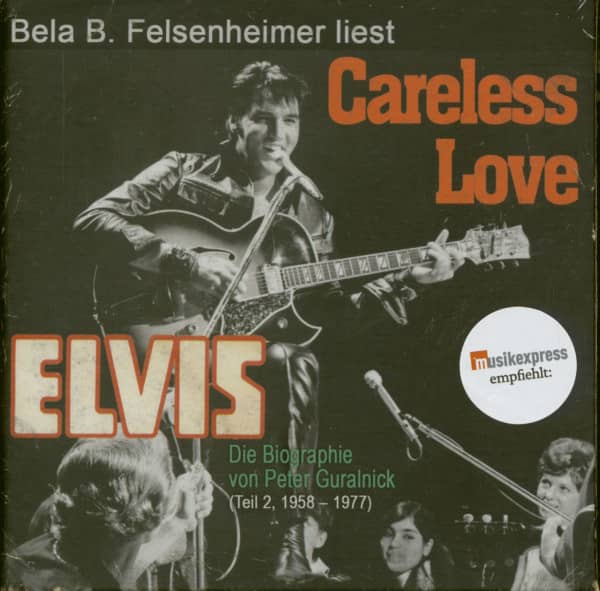 12-CD mini box (CD format) with 44-page booklet, 130 single tracks. Running time 890 minutes.
Medical drummer Bela B. reads the German translation of'Careless Love' by cult author Peter Guralnick. The book is published by Bosworth Music (ISBN 978-3-86543-107-3).
The author and biographer Colin Escott:'Even 35 years after his death, Elvis Presley remains present as an over-icon in rock music. The list of his records from 23 years as a record star is breathtaking: artists with the most chart quotations of all time; most hits; most top 40 hits; most top 10 hits; most weeks at number 1; most number 1 hits in a row; most gold and platinum awards.'.
Bear Family is happy to have received the audio book rights to the most important Elvis biography and successful translation of'Careless Love' by cult author Peter Guralnick for the German edition, "perhaps the best biography ever written about an American musician" (Memphis Commercial Appeal). The book was published in 2006 by Bosworth Music (ISBN: 978-3-86543-107-0). Peter Guralnick is one of the most important authors who write about music and musicians, and his books include'The Triumph Of Sam Cooke' and'Sweet Soul Music: Rhythm & Blues And The Southern Dream Of Freedom'.
In'Careless Love', the second part of the two-volume Elvis biography, Peter Guralnik describes the period from 1958 to 1977: The Army period in Germany, the return to Memphis, the world hits, the recording sessions and marketing strategies, the films in Hollywood, the 1968 comeback, the wedding with Priscilla, the'Aloha from Hawaii' concert, the drug, medication and eating excesses, and the difficult time in the first half of the 1970s until his tragic death in 1977.
As in the original, the Presley production includes two audio books:
The second part,'Careless Love' will be released in July 2007 on the 30th anniversary of Elvis' death on August 16. Bela B. Felsenheimer is a singing drummer in the rock band Die Ärzte and wrote German music history with them. Since early childhood he has had two hobbies: comics and rock'n' roll. And again and again he enjoys sideshows: For a long time he had a horror comic publishing house EEE (Extrem Erfolgreich Enterprises), and has also been active as an actor for 10 years, for example in the crime scene'Die Kunstfabrik' (2003) or in the cinema productions'Die Edelweißpiraten' (2003) and'Bye Bye Harry' (2006).
Again and again he reads audio book productions, among others'Die Brautprinzessin','Faust vs. Mephisto' or Sacher'Venus im Pelz'. For the Danish animated film'Terkel in Trouble' (2005) he gave his voice to all persons appearing in the film: men, women, children, and sang all the songs. In 2006 he released his first solo album "Bingo!", entered the album charts from position 0 to position 2, and toured extensively with his band Los Helmstedt. In 2007 there are more films and a new Die Ärzte album on the schedule.
"When Elvis died in 1977, I was just 14 years old and gave myself over to the revolt of punk rock. But soon I realized that all this would not have happened without Elvis. Elvis has changed more in this world than most wars or changes of government. Peter Guralnick's book made me feel closer to Elvis than I had thought possible. Sometimes it was as if I was standing right next to him."
Bela B. Felsenheimer
Press about the first part - 'Last Train To Memphis'
A book for crying and dancing. Sogartig spoken by a big, devoted fan - Bela B. Felsenheimer, drummer with the doctors.
focus
Bela B. Felsenheimer manages the balance between love and pathos, politics and history congenially with the audio book! Rolling Stone Bela B. von den Ärzten reads lovingly articulated by the greatest singer of the 20th century. Photos and packaging make for perfect happiness.
The time
The King to the doctor. Elvis is alive, of course!
Star Audiobook of the Month May!
Piranha Bela B. manages to present the dense material of the original so calmly and yet respectfully that one hardly gets the impression that one hears oneself through the reading of a non-fiction book.
U-Mag
"Doctor B." presents the meticulously researched biography in the best High German, pointedly and with a pleasant voice. dpa "One can feel one's breath, this book erases all others",
praises Bob Dylan Guralnick's biography.
Bela B. transmits this feeling also in the German translation!
Hamburg Pure

(January 8, 1935, Tupelo, MS – August 16, 1977, Memphis, TN)
Elvis Presley (full name Elvis Aaron Presley) is the most outstanding personality in showbiz ever since, and the most popular entertainer the world has ever seen! His musical influence within music history and its following generations of musicians is still unbroken. His huge 'Blast-Off' in the mid-1950s, the rising star from a simply called 'Hillbilly Cat' (at Sun Records) to a lascivious Rock'n'Roll singer with charisma, a male sex symbol (then at RCA Victor) soon popularized him as "The King of Rock'n'Roll" or simply "The King".
His first cut within his tremendous career happened between October 1958 and March 1960 while Elvis was on duty with the U.S. Army and stationed in Germany. It was there in 1959 when he met his later wife Priscilla Beaulieu at age 14. Elvis and Priscilla married on May 1, 1967 in Las Vegas (divorce in 1973). Elvis evolved into an all-around entertainer after his Army service and started starring in Hollywood films. 33 movies in total, including the two concert documentaries 'That's The Way It Is' and 'On Tour'. He again shook the world with his 1968 NBC Comeback TV Special after his movie period without any stage appearances.
This TV special included the first ever unplugged session presented together with musicians from the early days such as Scotty Moore and D.J. Fontana. 1973 saw THE TV mega event at all: Elvis Presley, 'Aloha From Hawaii via Satellite'! Elvis' Honolulu appearance, the first time that a show was broadcasted worldwide via satellite! He was ahead of his time! Elvis Presley had 148 US single chart hits, including some so-called double-sider when A- and B-side both hit the charts like his 1956 smash 'Don't Be Cruel b/w Hound Dog', plus 15 EP hits between 1956 and 1977. Two billion of sold media and sound carriers by Elvis Presley is the estimated number! He received 14 Grammy nominations until 1978 and three Grammy for his Gospel interpretations. Elvis was the youngest artist when honored with the Bing Crosby Award (Lifetime Achivement Award) in 1971.
He is presented in 5 Halls of Fame (Rock'n'Roll, Rockabilly, Country, Blues and Gospel). Six of his song interpretations are collected in the Grammy Hall of Fame. On top of it all Elvis Presley got the most gold and platinum records and a Diamond-Award. He definetly is the 'Best selling solo artist in U.S. History' (RIAA – Record Industry Association of America)! Elvis Presley CD albums, vinyl records as LPs or singles at 45rpm - Bear Family offers a huge number of various Elvis Presley CDs, vinyl-LPs and 45rpm singles, vinyl- and CD box sets, books and mags, DVDs, unique and extraordinairy memorabilia! Let's say it in the words of one of Elvis sixties album title: There is "Something For Everybody"! And hey, you name it! Elvis Presley is the King of Rock'n'Roll, the biggest icon in showbusiness, and a great person who lives on forever!
Bear Family Records treats his legacy with the most respect and an optimum capacity of expert knowledge.
Review 1
Read, write and discuss reviews...more
Close menu
Customer evaluation for "Careless Love (12-CD Deluxe Box Set) Bela B."
From: Werner Schuster On:31 May 2017