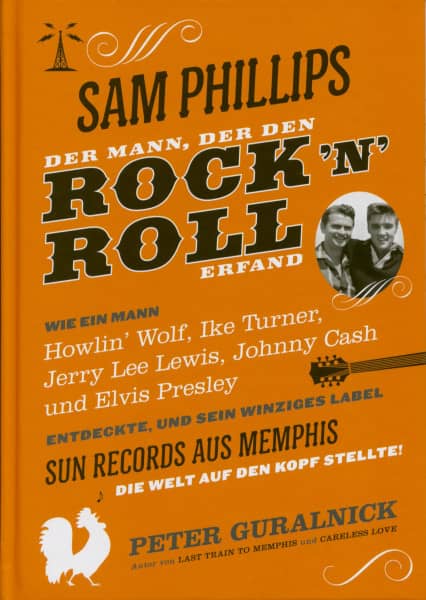 Sam 'The Man Who Invented Rock n' Roll' Phillips, was born on 5th January 1923 in Florence, Alabama, the youngest of eight and the seventh surviving child of a family that lived in a remote rural colony called the Lovelace Community. His father, Charlie, had a gift for farming, which was brought to an end by the Depression. His mother picked guitar and showed the kind of forbearance that allowed her to name her youngest child after the doctor who delivered him drunk and then had to be put to bed himself. And yet from these unprepossessing origins, in 1951 he made what is widely considered to be the first rock 'n' roll record, Ike Turner and Jackie Brenston's 'Rocket 88'. He also recorded the artist he still considers the greatest talent with whom he ever worked, Howlin' Wolf ('I was blinded by the sound of his voice; it was so bad it was beautiful'). He recorded B.B. King and Rufus Thomas at the outset of their careers, until in the summer of 1953 a shy eighteen-year-old kid with sideburns, just graduated from high school, wandered into his studio to make a record 'for his mother' - and in hopes that somehow he might get noticed.Elvis Presley's success, and the subsequent triumph of rock 'n' roll, was initially propelled to an almost astonishing degree by a limited number of releases by Carl 'Blue Suede Shoes' Perkins, Johnny Cash and Jerry Lee Lewis from this tiny one-man label. The structure of Peter Guralnick's dazzling book is a mix of the biographical - particularly at the beginning when Sam was working eighteen-to-twenty hours a day zeroing in on his vision - and the anecdotal. Here is one shining moment in the history of popular culture. And Sam Phillips was the man who brought it all about.