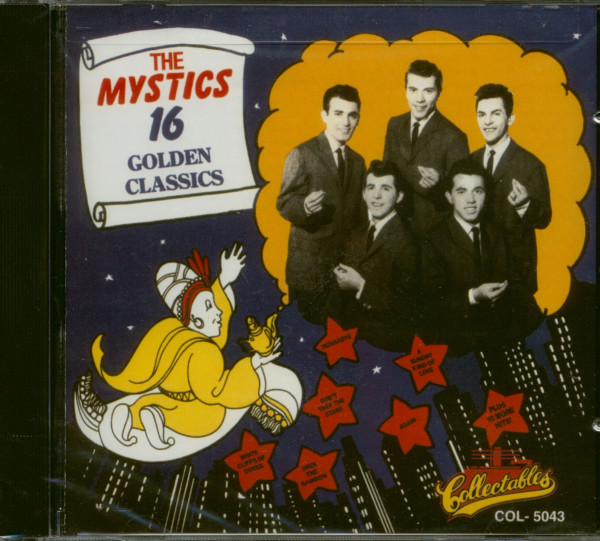 Brooklyn was teeming with young Italian-American doo-woppers looking for their big break. The Mystics started out in Brooklyn's Bensonhurst section as The Overons. After a few personnel changes, they solidified in 1958 with lead tenor Phil Cracolici (who had been replaced during a Navy stint by Joe Strobel), first tenor Bob Ferrante, second tenor George Galfo, baritone Albee Cracolici (Phil's brother), and bass Allie Contrera.

After plenty of rehearsing, The Overons headed to Manhattan in search of record contract. George Goldner at Gone/End Records wanted to sign them, but his terms were unsatisfactory to the group. They had a better feeling about Jim Gribble assuming their managerial reins after he caught them cutting a demo session at Broadway Recording Studios at 1650 Broadway. He didn't care for The Overons as a name, so everyone threw a different one in a hat, and Contrera's nomination was chosen. Gribble signed the newcomers to Laurie Records in late '58. They cut Adam And Eve for the label, which would serve as the B-side of their debut 45. For the plug side, the group hoped to cut A Teenager In Love, but Laurie handed it to Dion and The Belmonts instead (see above). Fortunately, its writers, Doc Pomus and Mort Shuman, were extremely prolific.

The compositional duo came right back with Hushabye, a catchy mid-tempo number that Laurie issued in May of 1959. It charted at month's end, sailing to #20 pop over a 15-week span; the group toured the Midwest that June. Their encore, Don't Take The Stars, only made a #98 impression that autumn with So Tenderly on the B-side. Right about then, Phil Cracolici left. His successors were intriguing: Paul Simon joined just long enough to participate on their third Laurie platter in early '60, pairing the Kal Mann-penned All Through The Night b/w To Think Again Of You. Jay Traynor, future lead of Jay & The Americans, replaced Simon that spring for Blue Star and its sentimental standard flip The White Cliffs Of Dover.  The door continued to revolve: Eddie Falcone fronted their next release, Goodbye Mister Blues. Ralph Lizano came in to sing his own Darling I Know Now as a farewell.

Both Cracolicis, Ferrante, and Contrera were reunited for The Mystics' 1981 LP 'Crazy For You' on the Ambient Sound label. Phil and Galfo perform in the current edition of the group.