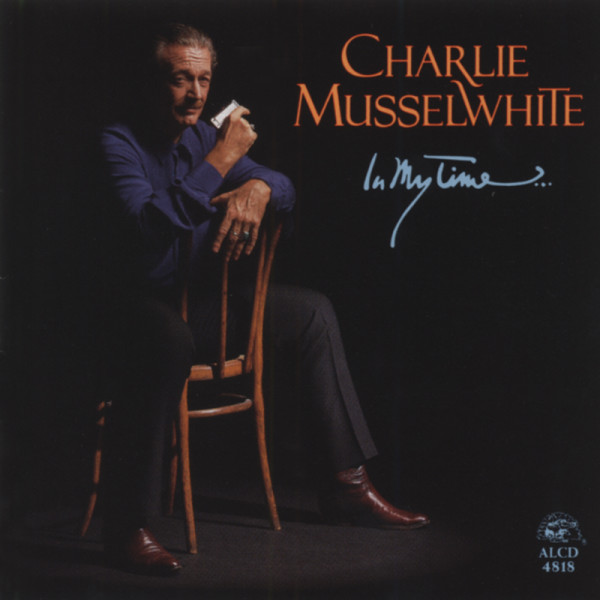 Charlie Musselwhite: In My Time

Charles ’Charlie’ Musselwhite was born January 31, 1944 in Kosciusko, Mississippi. At the age of three, the Musselwhite family moved to Memphis, Tennessee. During the mid-fifties Memphis became the birthplace of rock and roll music, and Sam Phillips recorded modern electrified blues, rockabilly, gospel, and country music in his tiny studio at 706 Union Avenue. Radio stations broadcasted the blues and rock and roll from Memphis to the world.

Young Charlie Musselwhite was infected by the blues virus and went on a search for musicians from the pre-war period such as Will Shade, Furry Lewis and Gus Cannon. The old men taught him the first tricks on the guitar, and Musselwhite acquired the nickname ’Memphis Charlie’.

A few years later Musselwhite made his way to Chicago. On Highway 41, thousands of blacks had previously travelled in search of work in the factories and slaughterhouses of the North. During the early sixties, Chicago became the Mecca of modern electric blues. Here Charlie experienced in the clubs of Chicago's Southside all the famous Blues people from the heyday of the genre like Muddy Waters, Sonny Boy Williamson, Howlin’ Wolf, Walter Horton, Little Walter, and Junior Wells & Buddy Guy. He occasionally worked at the Jazz Record Mart owned and operated by Delmark Records’ founder Bob Koester. For a while he lived in the basement, where blues legend Big Joe Williams also lived.

Musselwhite, meanwhile a technically skilled harmonica player, hung out at Delmark Records or at the Jazz Record Mart and jammed with Big Joe Williams, playing for tips. In the evenings he was attracted to the blues clubs in the black ghettos of Chicago. During his early years in Chicago, he met John Lee Hooker and made friends with him. Hookler lived in Detroit, but often played in Chicago. Hooker served as best man at Musselwhite's third marriage. Gradually Musselwhite became well known around town.

At some point Musselwhite led his own band and recorded his first LP for the Vanguard label in 1966, Stand Back! Here Comes Charley Musselwhite's Southside Band. These were good days for white Chicago blues bands like Paul Butterfield's (with guitarist Michael Bloomfield) and 'Memphis Charlie's'. The success allowed him to move to California, the heart of the hippie movement and psychedelic rock music. Musselwhite quickly became a popular part of San Francisco's subculture. He played the Avalon Ballroom or the Fillmore with rock groups like the Jefferson Airplane or Quicksilver Messenger Service. While he was a little white boy in Chicago who loved, played and lived the blues, he became the star of a small blossoming blues scene in SF. Finally, he was able to persuade his friend John Lee Hooker to move to Northern California as well.

Charlie Musselwhite still lives in Northern California. He can look back on more than 50 years of history as a professional musician, has released about 30 albums, won the Blues Music Award of the Blues Foundation in Memphis countless times, was inducted into the 'Blues Music Hall of Fame' in 2010 and, after ten nominations, received a Grammy Award together with Ben Harper for the album 'Get Up!'

Charlie Musselwhite's tone and his performance are unique. His playing is extremely sensitive, balanced and innovative. His appearance is incredibly congenial, and his singing has gained in intensity, feeling and humor over the years.

Charlie has appeared on albums by such diverse musicians and bands as INXS, Tom Waits, Cyndi Lauper, the Blind Boys Of Alabama, Vassar Clements, Cat Stevens, and Bonnie Raitt. He has been honored with lifetime achievement awards. His open, friendly and human nature and elegant coolness have made him one of today's great ambassadors of the blues.

Charlie Musselwhite celebrated his 75th birthday on 31 January 2019. He lives with his wife and manager Henrietta 'Henri' near Santa Rosa in California.– Detlev Hoegen, February 2019