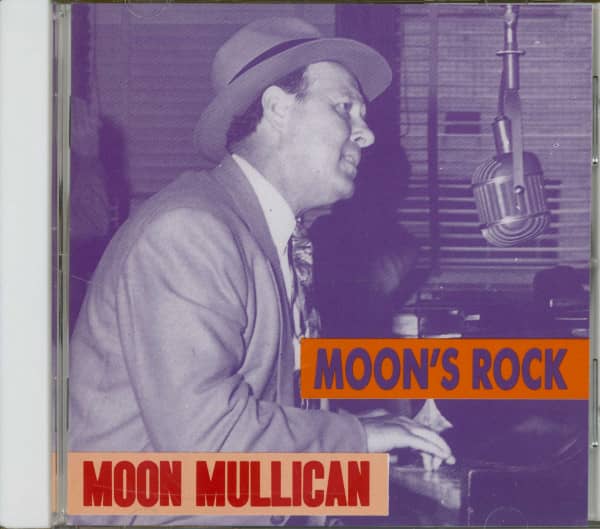 After finally getting free from King Records, Moon went on to record for Decca and Coral Records during the heart of the rock 'n' roll era, and that's the part of Moon's story we're telling here. He re-cut some of his big hits, like wie Pipeliner Blues, Sweeter Than The Flowers and I'll Sail My Ship Alone. He also cut a lot of great new songs, including Jennie Lee, Sweet Rockin' Music, Early Morning Blues, Colinda, and Cush-Cush, Ky Yay.
"I always loved Moon's playing and singing and we were trying to figure out some kind of formula for him because music was going through a change about that time with rock and roll, from one thing to another and it was hard tofindaformulafor him." Owen Bradley, September, 1991

On January 29, 1956, Moon Mullican was in the King Recording studios in Cincinnati, Ohio for his final session for the label. After nearly a decade with King, he was recording his final eight songs for King, for a total of an even 100 songs. The previous year, he left the Grand Ole Opry, where he'd been a cast member for the past six years. That final King session was fraught with irony. Backing Moon wasn't the usual complement of country sidemen, but a saxophone-driven rock and roll band, Boyd Bennett and his Rockets, signed to King the previous year.

Moon had taken stabs at R & B in the past, given King owner Sid Nathan's penchant for having his country artists cover King R & B recordings and vice versa. He'd recorded Tiny Bradshaw's Well Oh Well in 1951 and in 1953 cut the double-entendre Todd Rhodes hit Rocket 69 as the more sanitized Rocket To The Moon. His country boogie material reached its peak of popularity with his 1951 hit recording of Cherokee Boogie, and helped spawn a new musical genre - rock and roll - that made Moon's hillbilly boogies passe. Moon would not benefit from these contributions.

No matter how much he actually influenced other piano rockers like Jerry Lee Lewis, he would not receive credit he was due in his own lifetime. And by then he couldn't have passed himself off as a rocker. Overweight and balding, he now resembled a rocker's grandfather. "The times were right for Moon's style at King," says Owen Bradley, with the implication that those times had passed. By 1958, Moon was in his second year without a recording contract.

Nonetheless, at age 49, Moon had come far from Corrigan, Texas, (some ac-counts give his birthplace as Moscow, Texas) where he was born Aubrey Mullican on March 29, 1909. Corrigan, 60 miles north of Houston and Beaumont in Polk County, was a region laden with lumber camps and saw-mills manned by black laborers. Those laborers hung out in juke joints teem-ing with booze, violence and barrelhouse piano playing. On the 87-acre Mul-lican farm, young Aubrey heard a black sharecropper and blues guitarist named Joe Jones, who imbued him with a love for blues.

A highly religious family who attended church three times a week, the elder Mullican bought a pump organ in 1917 so his daughters could learn to play it for church services. The idea of Aubrey playing blues on the organ, music many religious typesof both races called 'the Devil's music,' didn't please his father. By age 14, he was good enough to walk into a Lufkin, Texas cafe, sit down at a piano and leave two hours later with $ 40 in tips. Two years later, Aubrey, who had little use for farm work, clashed once too often with his father and left for Houston. There he somehow picked up the nickname `Moon,' either from his nocturnal working hours or from a shortening of the nickname 'Moonshine.'

The fledgling western swing scene was beginning by the time Moon was in his twenties. By 1936, Milton Brown and His Musical Brownies, Texas' premiere Western Swing unit (Bob Wills was based in Oklahoma), was dis-integrating after Brown unexpectedly died of complications stemming from his unjuries in a car crash. Most of the Brownies - steel guitar innovator Bob Dunn, fiddlers Cliff Bruner and Cecil Brower, pianist Fred Calhoun and others - scattered to other bands. Milton's brothers tried to keep the Brownies going but the group's impetus died with Milton. 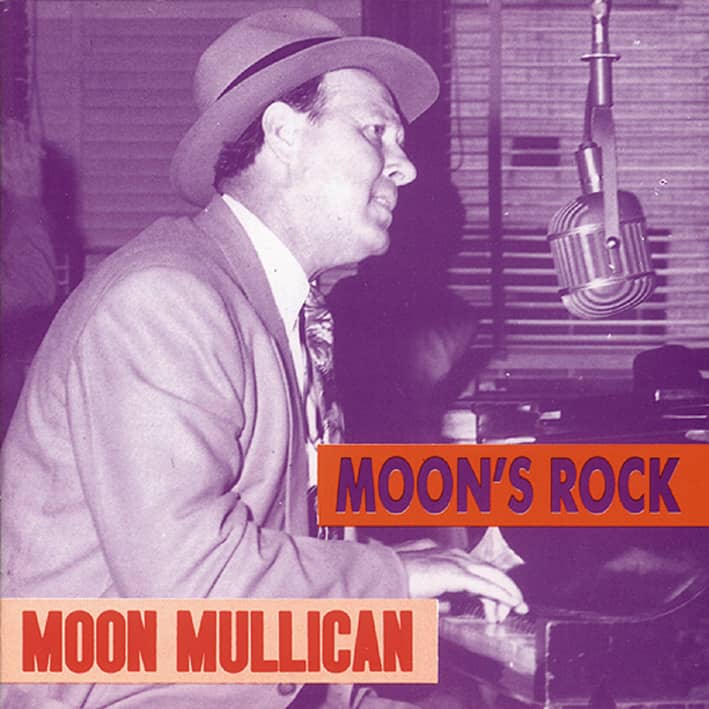 fter finally getting free from King Records, Moon went on to record for Decca and Coral Records during the heart of the rock 'n' roll era, and that's the part of Moon's story we're telling here. He re-cut some of his big hits, like Pipeliner Blues, Sweeter Than The Flowers and I'll Sail My Ship Alone. He also cut a lot of great new songs, including Jennie Lee, Sweet Rockin' Music, Early Morning Blues, Colinda, and Cush-Cush, Ky Yay.

Moon Mullican is most important man for music history. Not only as a example for Jerry Lee Lewis (and so on). Every music fan must have something from him in music collection. This Bear Family recording is just right for this purpose...