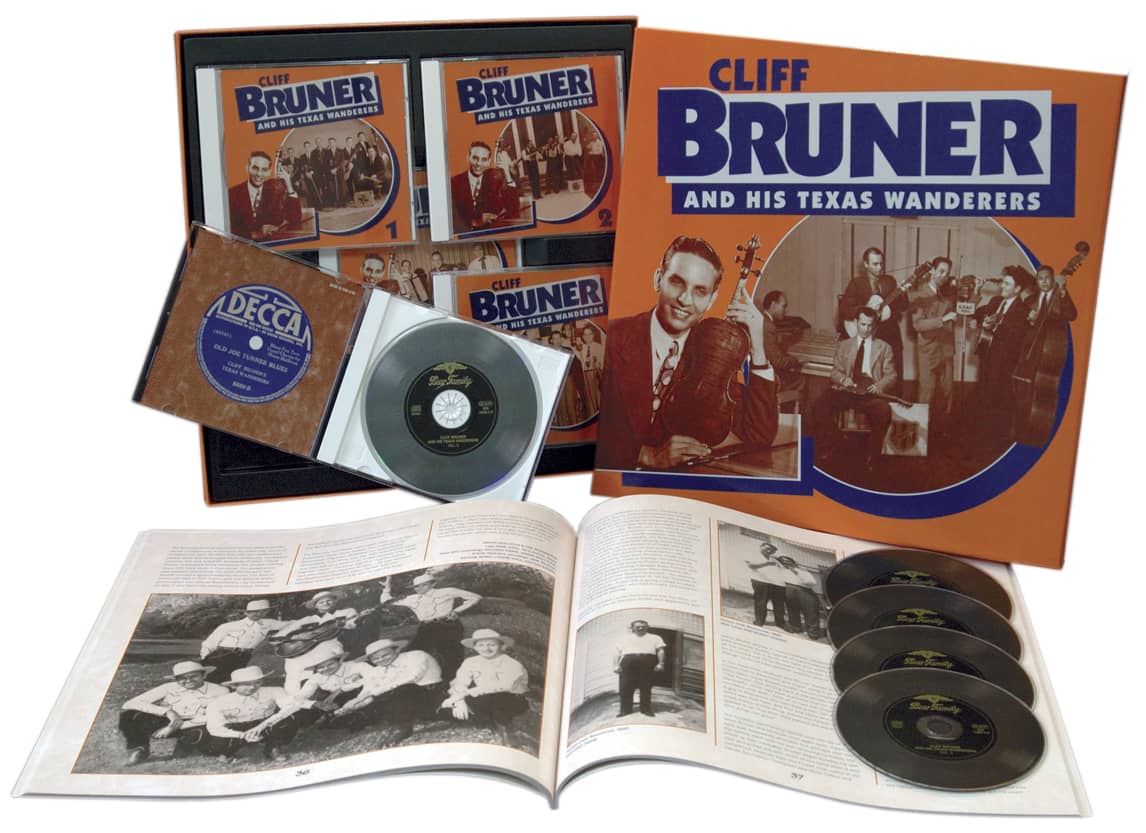 Clifton Lafayette Bruner was born April 25, 1915, in Texas City, Texas, the seventh and last child of Charlie Lonzo Bruner, the fourth with his second wife, the former Nettie Decker. Both parents were from Arkansas and the family returned there when Cliff (or Clif— he’s spelled it both ways over the years) was very small. It was near Prairie Grove, at “a little settlement up in the hills called Strickler way back toward the Devil's Cave,” that Bruner took up the fiddle by age four, before he’d ever started school and, he says, “before I could even talk good.”
What drew him to the fiddle is anybody’s guess. Nettie Bruner played some guitar and French harp, but the Bruners were not an especially musical family — a little piano in church, maybe, but no fiddlers (“Seems like nobody played music up in those hills," Bruner laments. “That was the problem”). Bruner started school in Arkansas, but when he was around eight, Charlie Bruner moved back to Texas, where he had previously been a longshoreman on the Texas City docks. “He always  wanted to farm. He’d been a sharecropper, but he'd go broke and go back to the docks.”
Finally, Charlie Bruner got a couple of acres north of Tomhall, northwest of Houston, where Bruner says, “It was nothing but a few gravel roads out there in that territory at that time." It was at Tomhall that Bruner finished his schooling and where he was struck with a wanderlust that began taking him all over the state, looking less for adventure than for more opportunities to play his fddle. At Tomhall, too, he “started playing the old country dances that we used to have, with the corn meal on the floor. I never did like to pick cotton or raise watermelon and I found out I could make more money playing my fiddle than I could doing that. So my heart just got set on music and there was nothing I could do about anything else‘ I wanted to play music. It was just imbedded into me.”
Bruner can cite no major formative influence on his fiddling and he grew up with no phonograph, no radio. In his early teens, he began to meet other fiddlers, to jam and trade licks; he learned something, to be sure, from these encounters — from every early musical encounter, probably — but Bruner’s peculiar touch and sound was his own, a style arrived at in relative isolation. That Bruner became an amazingly inventive player is not surprising: where imagination might merely benefit a fiddler reared in much less isolated circumstances, for Bruner it was a necessity, the cornerstone of his style. "I've always wondered where Cliff and Pappy [Selph] and those guys got their styles," veteran Gull‘ Coast Fiddler Clyde Brewer, a generation younger, ponders. “I mean, we had them to listen to. And records. All sorts of stuff. But there wasn’t anything but old breakdown fiddlers, really, where they were. No one, really, to learn from."
Cliff Bruner & His Texas Wanderers (5-CD)
Read more at: https://www.bear-family.de/bruner-cliff-his-texas-wanderers-5-cd.html
Copyright © Bear Family Records

5-CD box (LP-size) with 60-page book, 123 tracks. Playing time approx. 497 mns. Fiddler Cliff Bruner 's Texas Wanderers were one of the most important and exciting bands in Texas Swing history, a group that stirred countless others and...
$73.56 $112.74
Song preview