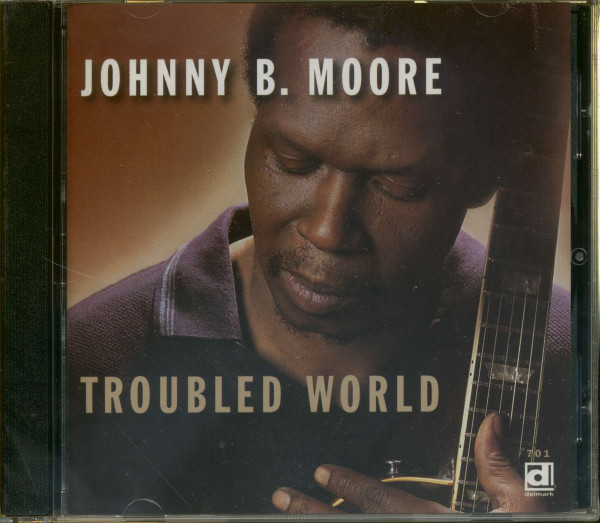 Brett J. Bonner in his liner notes: 'Johnny goes from the early Chicago sounds of Muddy Waters, Jimmy Reed and Sonny Boy Williamson to the Louisiana roots of Guitar Slim over to the chitlin circuit sounds of Chick Wills back to modern day Chicago with two originals. Johnny's guitar work is more confident and mature than on any of his previous releases and his vocals continue to get stronger and stronger.' Right.

Although still thought of by some as one of the 'young turks' on the Chicago blues scene, Johnny B. Moore has more experience than many 'grizzled veterans', with over a quarter century as a professional and countless recording sessions under his belt. This talented and versatile guitarist has previously lent his talents to Delmark releases by Willie Kent, Bonnie Lee and Karen Carroll; Troubled World is his second release for the label as a leader; his first was Live at Blue Chicago (DE-688).

Learn more about Johnny B. Moore
ROCKIN' IN THE SAME OLD BOAT' is a marvelous coinage that ties together two age-old expressions.... more
Close menu
"Johnny B. Moore"

ROCKIN' IN THE SAME OLD BOAT' is a marvelous coinage that ties together two age-old expressions. Consider if you will that most of us are in the same boat, and some are also rockin' that boat. To varying degrees, we live life close to the edge. We're like tightrope walkers—just one mis-step from falling off our wires: and like boat rock-ers—one rock away from going over. We know the risks. but truthfully. we don't much give a damn about our cholesterol numbers. or the speed limit, or how many people can safely fit in the boat. We know the limits, and our reason says. "Yes. I understand."

But our actions often say. "f©ck it." Basically, those who don't get in the boat are on dry land, just standing around. To live your life you've got to get in the boat and take the risks and the rocking. And when you take someone else into the boat. you accept more risk and, naturally. more rocking, but you can go farther if you work together and share the pains and pleasures—just so long as you don't go overboard. This is Johnny B. Moore's third CD for Delmark. following Troubled World from 1997, and Live At Blue Chicago from 1996. Rockin' is Moore's rawest. most soulful release yet. and perhaps the one most true to the vibe and set list of one of his shows in front of a dancing crowd on a sweltering Saturday night. There are no studio effects here—no horns. no overdubs. It's straight-ahead West Side Chicago blues performed just the way it's done up close and in person.

Together these tracks represent Moore's most personal statement thus far for Delmark. Johnny B. moves fluidly from one number to the next. and from one style of blues to another, pulling inspired selections out of his deep repertoire bag, almost daring his rhythm section to follow him. Many have written of Moore's incredible guitar skills. how he handles all the leads. fills and rhythm, effortlessly transitioning from the lead line to the support chord. the lump or the rhythm chop. Lone-some For A Dime is an outstanding example of his restless, dextrous attack. And check out That's The Way Love Is. on which he answers each vocal line. moving from chording to a sweet burst of high picked notes. Beautiful. On Bobby "Blue" Bland's Rockin' In The Same Old Boat, he exhaustively explores a one-chord workout. And Moore tosses in a few distinctive off-kilter touches. too, like the odd chord voicings on Big Boss Man, the near-flat turnarounds on Baby Please Don't Go. and the abrupt mid-turn song endings—a legacy handed down from his guitar mentor, the late, great Eddie Taylor.

As varied and inventive as his guitar playing is though. it's also Johnny B.'s facility with words. coupled with his soul-baring vocals that help rock this boat. On King Bee he gives a lively twist on Slim Har-po's warhorse when he makes the spot-on assertion that he's a king bee. "buzzing round your hide." fin-ishing the deliciously lascivious thought with. "Let's make honey baby, let me come inside." Johnny B. also embellishes Bobby Bland's That's The Way Love Is with a few fresh lines that heightens the intensity of the theme. Broke Man. which appeared on the recent CD celebrating Delmark's 50th Anniversary. features such thought-provoking lyrics as. "What make a broke man sleep so sound? He didn't have a damn thing—before he laid down." His spoken narra-tives—like the one that emerges in the midst of Matchbox Blues—are brilliantly wrought vignettes, no doubt borrowed in part from his early years grousing up in the Mississippi Delta country. Chicago's West Side. which has been his home for more than 30 years, is represented by his no-holds-barred versions of Cut You A Loose and Magic Sam's Lookin' Good. His gruff, almost strained vocals reflect possibly his most emotionally charged and ingenuous effort thus far. His nearly hoarse pleading brings out every ounce of feeling from Crazy Over You in a heartrend-ing performance.

In fact. Moore loves the sweet, bright sounds of the '60s Chicago soul scene which was going full tilt when he first arrived as a fourteen-year-old from Clarksdale. Mississippi in 1964. That keening musical sensibility of Chicago's particular brand of soul. indelibly etched onto his musical per-sona. wends its way through She Hit Me From The Blind Side. and wells up throughout the eminently danceable That's The Way Love Is. and is fully real-ized on a remarkable performance. achingly ren-dered. of Buster Benton's Lonesome For A Dime. We identify with Johnny B. Moore and his rough-crafted blues and brute-beautiful open-heart singing because he is like the rest of us who are wrestling with life. trying to get by and struggling to meet our needs and make correct choices. We are all deficient. We are human. We are all rockin' in the same old boat. Johnny B. Moore's performance on Rockin' In The Same Old Boat tells it exactly like he sees it. He stands before us a scuffler. a scrapper, a survivor. an honest. however imperfect. man. This is life as sung and played—and as lived—by Johnny B. Moore, blues musician and boat rocker. — JUSTIN O'BRIEN 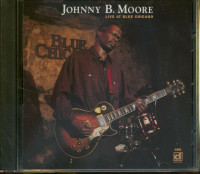 Tracklist
Moore, Johnny B. - Troubled World CD 1
01 Troubled World
02 Keep It To Yourself
03 Sittin' Here Thinkin'
04 I'm Going Upside Your Head
05 The Things That I Used To Do
06 Why You Wanna Do Me Like That
07 Stood Down Baby, Part Two
08 Broke Your Promise
09 Walkin' Through The Park
10 Think Twice
11 It's Too Late Brother
Funktionale