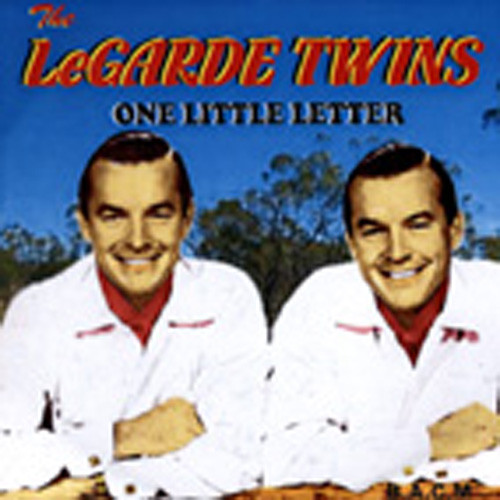 Here's an unusual story, and sadly one we have to truncate. The LeGarde Twins, Tom and Ted, were the youngest of nine children, born on a sugarcane farm in Habana, Queensland, Australia on March 15, 1931. Their father was Australian and their mother was from England. "Talk about poverty," said Tom, "we had no running water, no electricity, no phone, no shoes until we were seven.

My older brother, George, brought home a wind-up gramophone with a Jimmie Rodgers record. That was the first music we'd heard. Then mum took us to see a Hopalong Cassidy movie, and we wanted to be singing cowboys. George got us a guitar." They left home at fifteen, began working rodeos and circuses, and starred alongside Hopalong Cassidy on his '54 Australian tour. They first came to the United States in 1957, and began appearing on KTLA, Los Angeles. "We got a record contract from Bel Canto," said Tom, "which was part of Herb Newman's Era Records.

They wanted an album called 'Ballads of the Bushland.' Then Art Linkletter came back from Australia and began talking about the hula hoop, which originated there. Ted and I got together with Felix Valley, who was a rope spinner, and we wrote the 'Hula Hoop' song. It's the only rock 'n' roll record we ever did. We waited to record it until we could get [drummer] Earl Palmer and [guitarist] Tiny Timbrell. It got quite a bit of airplay, but Bel Canto had no money for payola." For the next four decades the LeGardes traveled between the United States and Australia, with a stint in Canada in 1962, and extended overseas tours sandwiched in-between. All told, they've clocked up over one million miles. Along the way, they've appeared on 'Star Trek' as androids and starred at the International Hotel in Las Vegas. For several years, they hosted a dinner theatre at the Quality Inn Hall of Fame in Nashville, and currently reside in Hendersonville, Tennessee.