The first release in our series of high-profile live recordings from the renowned anual 'Lucerne Blues Festival' in Switzerland. In November 1999 a band fronted by guitarist/singer Johnny Jones, and soul vocalist Charles Walker played two great shows. The nucleus of the band is formed by the ryhthm section of the Amazing Rhythm Aces, one of the best you can find in the South. Also in the band, guitarist/producer Fred James and vocalist Mary-Ann Brandon. Jones and Walker have been working together on and off for the last forty years. And this shows! Deep blues, shuffles and mid-tempo groovers along with a couple of tunes, '60s soul style. A great live record that we are very proud of, and hopefully the first in a long series. If you didn't have a chance to go, take this one home and enjoy a wonderful evening at Lucerne. JOHNNY JONES - gtr/voc, CHARLES WALKER - gtr, BILLY EARHEART - org, MARY-ANN BRANDON - voc, FRED JAMES - gtr, JEFF DAVIS - bass, ANDY ARROW - drums.

Born August 17, 1936 in Eads, Tennessee, Jones lived with his father in Memphis after his parents separated before venturing to Chicago in 1955 to stay with his mother. "That’s when I really started got serious about the guitar," said the late Jones. "I had just been riding around banging on it. But I got to Chicago, man, and I got to hanging around those clubs, and I go, ‘Wow! This is what I want to do right here!’" He began playing professionally the next year.

Johnny was chosen by prolific Nashville producer Ted Jarrett to play behind singer Gene Allison with saxist Jimmy Beck’s combo. Jarrett gave Jones his first studio jobs, notably on Beck’s 1959 hit Pipe Dreams and Larry Birdsong’s Every Night Of The Week, both on the Champion label. Before long, Jones was gigging six nights a week at the city’s New Era Club with the Imperials. "I stabilized the blues guitar in Nashville," he said. Jones’ two-part 1963 instrumental Really with the Imperial 7 came out on ‘Hoss’ Allen’s Hermitage label.

Jones was a key early influence on the musical development of Jimi Hendrix, based in Nashville in the early ‘60s. "I taught Jimi," said Jones. "He had everything else that he needed, but he needed a direction. I gave him a direction." When Hendrix split town, Jones took over Jimi’s King Casuals, anchored by bassist Billy Cox; that was basically the band he brought to ‘The!!!!Beat.’ The luxurious after-hours instrumental Finger Lickin’ , with Allen babbling in the background, came out on the Hollywood logo in 1967, Jones’ crew still listed as the Beat Boys.

Emcee Gorgeous George set Johnny and the King Casuals up with promoter Henry Wynne in Atlanta, leading to a contract with William Bell’s Peachtree label. Bell placed three late ‘60s Jones 45s with Brunswick: a funky Soul Poppin’, the Hendrix tribute Purple Haze, and an Albert King-influenced Chip Off The Old Block. Peachtree released two more on him, Mighty Low and Do Unto Others, during the early ‘70s, but an extended hiatus preceded Jones hiring on with Bobby Bland’s orchestra in 1976 for three years. "One of the best moves I ever made," he said.

When Johnny came off the road in ‘79, disco was wiping out Nashville’s blues scene, so he ran a soul food restaurant. "I got in that thing and stayed 14 years!" he said. Producer Fred James tracked him down and in 1997 brought several Nashville blues greats including Jones to Utrecht for Blues Estafette, leading to a deal with Black Magic and Jones’ debut CD. More discs followed, notably 2000's ‘In The House,’ a fine live set on Detlev Hoegen’s Crosscut label co-starring veteran Nashville singer Charles Walker (the two sometimes toured as a unit). Jones died October 14, 2009 in Nashville at 73, his body discovered by exterminators inside his apartment. 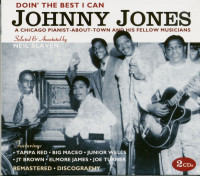