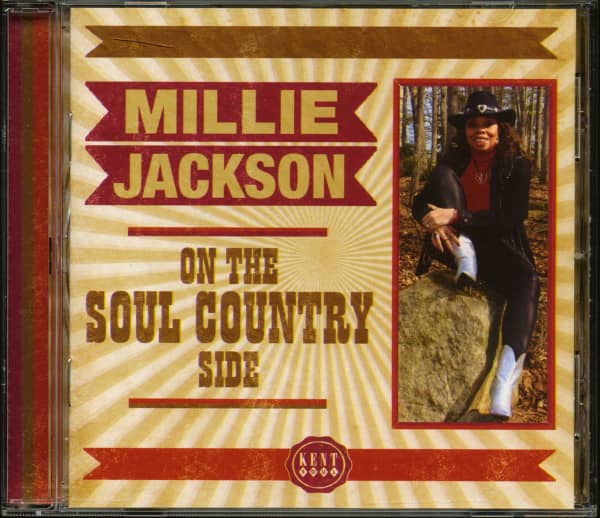 Millie Jackson: On The Soul Country Side (CD)

Although Millie Jackson’s sassy big city image suggests otherwise, she’s a country gal. Born in rural Georgia, Millie grew up listening to country music as there were no R&B stations in the area. It was only when she moved to New Jersey as a teenager that she had the chance to regularly hear anything else.
Almost every album Millie made between 1975 and 1981 contained at least one country song.  In 1977 she reached #5 on the Soul chart with ‘If You’re Not Back in Love By Monday’, a big hit for its writer Merle Haggard earlier that year. Millie also turned Kenny Rogers’ groundbreaking ‘Sweet Music Man’ into a Top 40 Soul hit in 1978.
In 1980 Millie cut an album that lived up to its title of “Just A Li’l Bit Country” but the record did not receive the promotion it deserved due to personnel changes at her record company. Millie regards it as something of a “lost album” and is pleased we are able to include several of its tracks in this new collection of her Soul Country material.
The sweep ranges from 1950s classics such as Don Gibson’s ‘I Can’t Stop Loving You’ and Charlie Walker’s ‘Pick Me Up On Your Way Down’ to songs that were nearly new when Millie put her stamp on them – Dolly Parton’s ‘Here You Come Again’ and her duet with Isaac Hayes on Anne Murray’s ‘You Needed Me’ (both Country chart-toppers) being two examples. Millie always picked her own material, usually in conjunction with producer Brad Shapiro. She chose all the songs here because she liked them and frequently liked the singers who sang them originally.
‘Black Bitch Crazy’, Millie’s makeover of Tyler Farr’s recent Country chart-topper ‘Redneck Crazy’ – created especially for this CD and her first new recording in 10 years – shows she can still interpret a country song in a compelling and contemporary way. Millie cut it this year after hearing Farr’s record on the radio and identifying with its message. It’s as good as anything she recorded at the peak of her chart popularity and is a more than welcome addition to her discography.
They say “you can take the girl out of the country, but you can’t take the country out of the girl”. The selection of songs and performances here show just how true that is in Millie Jackson’s case.
By Tony Rounce

Article properties: Millie Jackson: On The Soul Country Side (CD)

Statuesque former model Millie Jackson broke new ground later in the decade with her R-rated monologs about sex and cheating. In 1973 she was a soul singer and nothing more—and an excellent one at that.

Born July 15, 1944 in Thomson, Georgia, Mildred Jackson grew up in a rural environment until she joined her dad in Newark, New Jersey in 1958. Modeling came first, then singing--totally by accident when she entered a ‘64 talent contest at the Palms Café in Harlem. Millie’s rendition of Ben E. King’s hit Don’t Play That Song (You Lied) won her a $20 gig at the Crystal Ballroom on 125th Street that she never got paid for. Nonetheless, she was on her way, touring with L.C. Cooke (Sam’s younger brother) and impressing Crystal Ballroom guitarist Billy Nichols.

Nichols wrote and shared arranging duties on Millie’s 1969 debut single for MGM, A Little Bit Of Something, with producer Ronnie Savoy. But the MGM hookup was temporary. Jackson worked up an album’s worth of demos with Nichols that impressed the owners of New York-based Spring Records. Millie was no shrinking violet, co-writing her ’71 Spring debut A Child Of God (It’s Hard To Believe), which dented the R&B hit parade. She did even better the next year, registering a #4 R&B hit with Ask Me What You Want (which she penned with Billy) and going to #7 R&B with My Man, A Sweet Man.

Millie’s extended and explicit raps (the term meant something different back then) about unfaithful men and sexual exploits of all sorts became her trademark as she unleashed a steady stream of hits on Spring extending through 1983. She remains a sassy, vivacious vocalist. 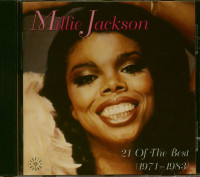 Tracklist
Jackson, Millie - On The Soul Country Side (CD) CD 1
01 Rose Colored Glasses
02 Here You Come Again
03 Angel In Your Arms
04 Pick Me Up On Your Way Down
05 You Needed Me
06 If You're Not Back In Love By Monday
07 I Can't Stop Loving You
08 Loving Arms
09 Till I Get It Right
10 Standing In Your Line
11 You Never Cross My Mind
12 I Wish I Could Hurt That Way Again
13 Cheatin' Is
14 Sweet Music Man
15 I Still Love You (You Still Love Me)
16 Anybody That Don't Like Millie Jackson (aka If You Don't Like Hank Williams)
17 Black Bitch Crazy (aka Redneck Crazy)
Funktionale