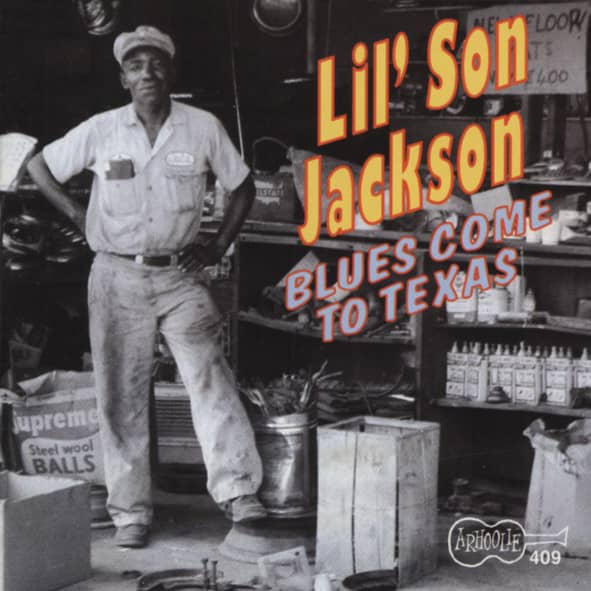 Please inform me as soon as the product is available again.
$19.34 *

Down in rural Texas, atmospheric country blues never went out of style. That's what Melvin 'Lil' Son' Jackson had plenty of. Born August 17, 1916 near Tyler, Texas, the diminutive guitarist was brought up by a blues-playing dad and a gospel-loving mom. Influenced by Lonnie Johnson, Blind Lemon Jefferson, and Texas Alexander, Jackson never quite came to grips with the gap between the sanctified and the secular, leaving blues alone altogether for extended stretches.

Lil' Son set his cap for Dallas in the early '30s to work as an auto mechanic. He formed a gospel group, the Blue Eagle Four, in 1934. After a stint in the Army during World War II, he returned to fixing cars in Dallas. One day in 1948, Jackson decided to spend a quarter in an amusement gallery to record himself singing Roberta Blues. He shipped the disc off to Bill Quinn, who operated Gold Star Recording Studio in Houston and also had a label by the same name. That Lone Star blues great Lightnin' Hopkins was then on Gold Star likely factored into Jackson's choice of label. An impressed Quinn wired Jackson after auditioning the demo, inviting him to come to Houston and record for real.

Gold Star released five Jackson singles, all solo performances, leasing another 78 to Modern. Then Imperial swooped in and brought Lil' Son to Los Angeles in September of '50. At his second session for the label that December in Houston, Jackson waxed Rockin' And Rollin', a regional hit that was a direct precedent to B.B. King's Rock Me Baby. Imperial initially retained the solo format when recording Jackson, but during the early '50s he made several dates for the firm with a small combo that didn't mesh overly well with the guitarist's slightly eccentric timing.

Happily, a September '53 session back in Dallas found Jackson back in a stripped-down context. He'd mostly recorded on acoustic guitar in the past, but had gone electric by the time he made Piggly Wiggly, a sly original that's a double-entendre homage to a southern grocery store chain still in business today. There was one more Imperial date in '54, but serious injuries in a 1956 car crash while he was on the road fueled his desire to get out of the blues business. That is, until Arhoolie Records owner Chris Strachwitz tracked him down in July of 1960 at Union Salvage in Dallas and convinced him to record anew.

Good as his comeback sides were, Jackson's return to blues was only temporary. Cancer claimed him at the Dallas VA hospital on May 30, 1976.