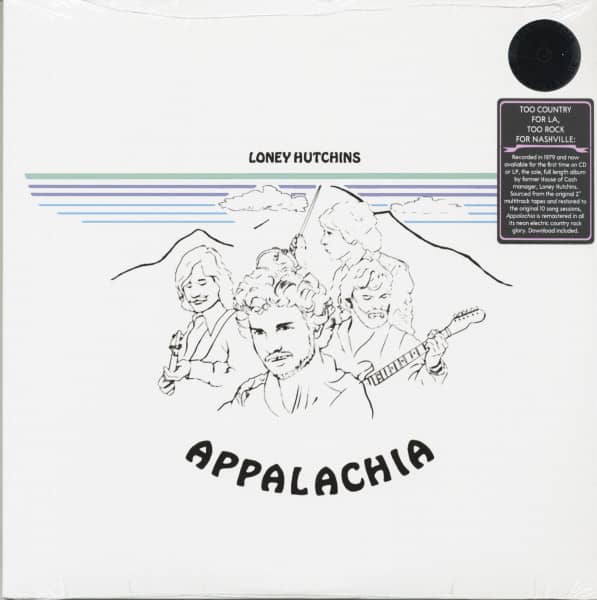 Recorded in 1979, the country-rock album now appears remastered in the version originally intended by the artist but never released. In 1983, Appalachia was released on cassette as Appalachia Music in a version adapted to the music market of the time and modified with country ballads, which eventually led to the formation of Appalachia Record Co. Now, thanks to Loney Hutchins' son Loney John Hutchins (remixing) and Mark Galup (mastering), the originally planned compilation (the master tape still had the original note from Elektra's A&R rep at the time, Good band, too folkie) shines in new splendor. Appalachia still comes across as bold: A neon country rock album too heavy for Nashville and too country for LA," according to Hutchins.

The original recordings for this album were made after the House of Cash phase. At the time, Hutchins put together a band that included Dolly Parton's live band musicians at the time, Paul Urhig and Tom Jones, as well as electric guitarist Harry Robinson. The result was a sound that was exponentially more modern than Hutchins' tapes from the House of Cash.

There are moments of high-fidelity rock swagger à la the Steve Miller Band on tracks like When You Fall In Love, country choogle on Son of No Good Man as Eddie Rabbit might have recorded it, and electric bluegrass harmonies on lead-off track Timbertree, which recalls the Eagles' country rock. Also heard are reworked versions of songs penned by Hutchins and recorded by other artists, such as You Still Have That Look In Your Eyes, first released by Johnny Cash's brother Tommy, and Wouldn't Say It If It Wasn't So, as well as We Got It All.