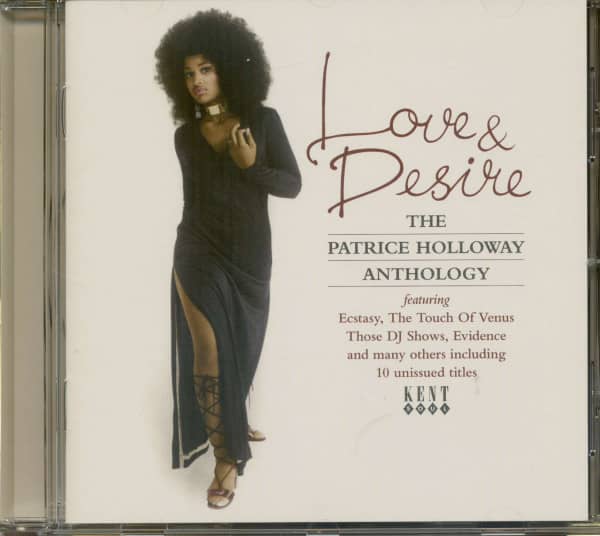 P Secure bonuspoints now
Description Review 0
Description
'Patrice was beautiful, she was sassy. She was extraordinarily creative and way ahead of her... more
Close menu

'Patrice was beautiful, she was sassy. She was extraordinarily creative and way ahead of her generation. I loved her very, very much.' Motown producer Frank Wilson

What an adventure it was to write the liner notes for 'Love & Desire: The Patrice Holloway Anthology'! I had the opportunity to immerse myself in the life of this fascinating unsung artist through interviews with a host of her legendary colleagues: stellar session vocalists such as Clydie King and Edna Wright as well as Motown icon Brenda Holloway, Patrice’s sister. What emerged was a portrait of a singularly talented, spirited and fascinating young woman who was truly beloved by all who knew her.

What didn’t emerge was the answer to an age-old riddle: Who sang backup behind Diana Ross on ‘Someday We’ll Be Together’? Brenda Holloway clearly hears her sister on the track, and Merry Clayton shared a vivid anecdote about rehearsing and recording it with Patrice. After the notes were sent to the printer, Motown stalwart Gloria Jones insisted that she had cut the vocals with Carolyn Willis and Patrice. Of course, the late producer Johnny Bristol claimed it was the Waters. File this one under Unsolved Mysteries.

But here’s the biggest mystery: How did Patrice Holloway not become a superstar? 'Love & Desire' showcases this brilliant vocal stylist on 25 rare tracks bursting with charisma and personality. Her complete output for Capitol is here: nine tracks released on five singles during two tenures with the label. ‘Stolen Hours’, ‘Ecstasy’ and ‘Love And Desire’ have long been Northern Soul favourites, and 1971’s ‘Evidence’ and ‘That’s The Chance You Gotta Take’ personify the 'value for money' single. Another highlight is 1967’s ‘That’s All You Gotta Do’, written by future Motown luminary Willie Hutch.

Did I say Motown? An excursion into the Hitsville vaults has yielded a treasure trove of exciting rarities. A few have sneaked out on compilations in recent years, such as Patrice’s original version of ‘The Touch Of Venus’, her duet with sister Brenda on ‘Come Into My Palace’ and her seldom-heard double-sided tribute to her teenage heartthrob, ‘Stevie’ and ‘The Boy Of My Dreams’. (Incidentally, Brenda spills the beans in the booklet notes on her little sister’s romance with young Mr Wonder.)

Ten Motown tracks see light for the first time anywhere. There’s further flirtation with Stevie on a lively cover of his ‘Surf Stomp’, a Smokey-produced version of the Miracles’ ‘All That’s Good’ and an authoritative take on Mary Wells’ ‘My 2 Arms – You = Tears’. Barely in her teens when she committed these tracks to tape, Patrice is yearning and tender on ‘Love Walked Right In’ and boisterous on ‘Flippitty Flop’. Versatility abounds over a wide variety of styles including doo wop (‘Crying’), mid-60s pop (‘The Go Gang’) and testifying soul (the powerful ‘I Got To Change’).

As I said, everyone who knew Patrice loved her. I, too, came to love her while working on 'Love & Desire'. Now it’s your turn.