(Hound Gawd Records) 11 tracks, with download!
The band's sound is a symbiosis of Chuck Berry, Ike and Tina, and AC/DC. Nikki Hill's vocals are natural and polished not by studio perfection, but by constant touring; the kind of lived-in, felt perfection that no quantization or pitch correction can fake.

On an album built like a wonderful live set, it provides the perfect soundtrack for the evening.

"Heavy Hearts, Hard Fists," the second album from Southern rock 'n' soul explosion Nikki Hill, is out on Hound Gawd! Records.
A punk rocker and former gospel choir singer whose "soul beats for AC/DC on one side and Aretha on the other," Nikki and her band - including Blues Music Award-winning husband/guitarist Matt Hill - peddle a thunderous boogie that reflects a rebel's love of R&B and inclination.
Creating a path outside the norm and stamping her own image is a life's work for singer, songwriter and bandleader Nikki Hill, who grew up in Durham, North Carolina, and lives in New Orleans.

Nikki Hill's first experience as a singer was as a child in the church choir.

In her teens, curiosity eventually led Nikki to trade in the pews for bar stools.
Her interest in music exploded in all directions, realizing it was a world without boundaries.
Hill went on to explore the role of black women in what would later become rock and roll.

If you haven't heard of Nikki Hill yet, you will soon, and once you see her, you won't forget her. 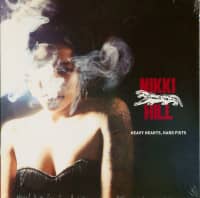