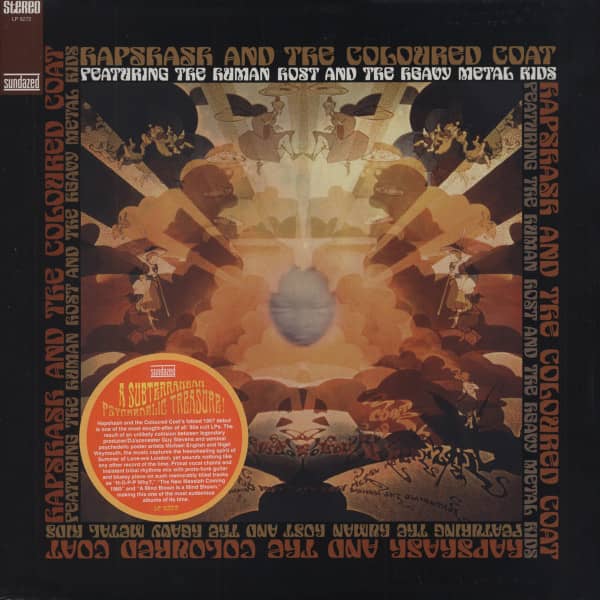 P Secure bonuspoints now
Description Review 0
Description
One of the most sought-after of all '60s cult LPs, 1967's Hapshash and the Coloured Coat... more
Close menu

Hapshash And The Coloured Coat: Feat.The Human Lost And The Heavy Metal Kids

One of the most sought-after of all '60s cult LPs, 1967's Hapshash and the Coloured Coat Featuring the Human Host and the Heavy Metal Kids is the sort of record that could only have emerged during the psychedelic era, and a vibrant manifestation of that period's freewheeling, boundary-breaking spirit of musical adventure. Hapshash and the Colored Coat'the English duo of Michael English and Nigel Weymouth'initially achieved notoriety as a graphic design team whose distinctive visual sensibility placed them at the center of London's original psychedelic explosion.

The pair's vivid visual imagination spawned album covers and countless posters promoting performances at London's legendary UFO Club by such acts as Pink Floyd and the Incredible String Band.Those visual works brilliantly captured the London scene's buoyant, mind-expanding vibe, and feature some of the psychedelic era's most arresting imagery. Such was Hapshash and the Colored Coat's prominence and influence that, in 1967, they were given the opportunity to branch out as a recording act. For the occasion, English and Weymouth teamed with legendary producer/manager/DJ/scene catalyst Guy Stevens, whose lengthy resume encompasses work with the Rolling Stones, Procol Harum, Mott the Hoople and The Clash.

The result was Hapshash and the Coloured Coat Featuring the Human Host and the Heavy Metal Kids. The unlikely collaboration produced a one-of-a-kind sonic experience that exemplifies the spirit of psychedelia while sounding like no other record of its time, mixing primal vocal chants and insistenttribal rhythms with proto-funk guitar and bluesy piano on such memorably titled tracks as 'H-O-P-P Why', 'The New Messiah Coming 1985,' 'Empires of the Sun' and 'A Mind Blown Is a Mind Shown.'

Out of print on vinyl for decades and never before reissued domestically, Hapshash and the Coloured Coat featuring the Human Host and the Heavy Metal Kids has been meticulously restored for this LP reissue, using Sundazed's usual exacting standards. The album is pressed on high-quality audiophile vinyl, and features complete original cover art.