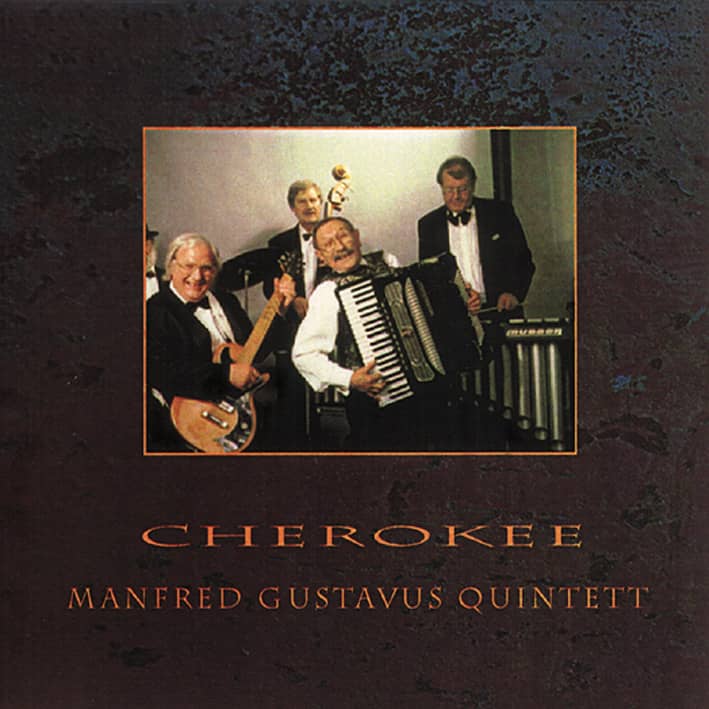 Gustav' - as his friends call him - was actually supposed to learn the mandolin. In the Gustavus family house music was often and gladly made. However, under a certain pressure from Mr Papa, who constantly urged all the other players to perfection. "Well, what about it, Manfred?" But the youngest member of the family didn't want to. Anything else, but please no mandolin.

Well, the music educator decided that it could also be an accordion, because Manfred already had a radio and record idol - the accordionist Will Glahé. In Münzstraße behind Alexanderplatz, where there were many music shops, an instrument was bought'on installment', a'Royal Standard' for 70 Reichsmarks, to be paid off with 3 Marks per month. That was in the mid-thirties. The family had just moved to the capital, from Pforzheim.

Manfred Gustavus was born in this town on the edge of the Black Forest on August 11, 1928. When he was six, he became a Berliner. Nevertheless, he can still speak a little Swabian'babbele' today. With this dialect he was initially the big hit with his school friends in Berlin - "Man, he comes from far away! When everyone had got used to it and 'Gustav' had already mastered the most important Berlin vocabulary such as "Dufte", "Knorke", "Penne", "Stulle", "Bulette" or "Schrippe", he again had something new with which he gained respect in his class: when he brought his accordion to the music lesson, he was the star of the lesson. For now he had been seized by ambition. He went to music lessons with a church organist who had a musical hobby: playing a particularly rhythmic, almost swinging accordion.

When the war began, he and his master student were occasionally used to support the troops. These were the first public appearances of accordionist Manfred Gustavus, who really wanted to become a musician himself - and not only to the joy of his father. Nevertheless, Gustavus had to officially begin an apprenticeship as a toolmaker, which was "important for the war" at that time.

Later, as the war started by the Nazis became increasingly hopeless, came the'people's storm'. Gustavus was drafted,'to ensure the final victory' he was taught how to handle the Panzerfaust and immediately afterwards he went into charity. He hid in the greenery near his parents' apartment, was supplied with food and waited full of fear - after all, this was no longer an adventurous game of hide-and-seek, but an undertaking in which one risked one's life - for the end of the'Millennial Kingdom'.

Finally, the time had come. The old friends met again and somehow they managed to get their familiar football field ready for play. The toads were in the cupboard, the dress was still there and the first whistle was blown in peace. Until a jeep with Soviet soldiers rolled onto the playing field - "Stoj! Who is Manfred...?". So get on the jeep and head for the Kommandantura. "Wait...!". Then he was allowed to enter the commander's room with his football boots and the striped sportswoman's dress, which was completely inappropriate in this environment. "You make music?" So word had got around to the occupying forces. A sergeant brought an accordion. "Play, now!". And Gustavus played, from Flic Flac and Flying Leaves to the Goose March and the Black Eyes. Finally the verdict: "You play well. You musician!".

So the football boots went back into the cupboard, but the good Sunday suit was ironed on. Manfred Gustavus was now used as solo entertainer in the evenings and on weekends. He played in front of soldiers and German audiences, in schools, sports halls, public squares and cinemas. During the day he worked as a toolmaker.

No easy times - but nobody wanted to sit back and relax, especially none of the young Berliners and'Gustav' certainly not. There were still the black market prices, of which life was determined - not only in Berlin: the currency was the respective daily price for an'active' - thus a real American cigarette. And then the prices for butter, bread, molasses syrup and even candle wax were determined. These were not good times, yet Berlin kept its sense of humour. The Berliners sang to the then very popular hit Chiu, Chiu, Choo, Schieber steh'n at Bahnhof Zoo - also: Yes, a Chesterfield makes my sister wild..., or whatever else came to mind at that time to well-known hit tunes.

In general, music had a very special significance in those years. She distracted from everyday life, created a happy mood and even the growling of the stomach many forgot about boogie, jitterbug and swing. Accordingly, musicians were in great demand in post-war Berlin. There were dance halls, in which the visitors were particularly crowded, because it always "really started" there. For example in a dance hall at the Schäfersee. There the band played Hans Petrick with experienced jazz and swing musicians of the early thirties. And right in the middle is the young Manfred Gustavus. He was - as he says today - grateful for these three years from 1947 to 1950, in which he learned a lot from his older colleagues: phrasing of course and the repertoire of the great swing titles that were forbidden in Germany during the war. Gustavus also had a new accordion teacher, the musician and composer Heinz Gerlach, who dedicated the rousing but extremely difficult composition Dancing Fingers to all accordionists.

In 1950 he founded his own trio and played in Berlin's almost forgotten shops: the'Hamburg Ahoi' on Rosenthaler Platz, the'Café Viktoria' in Wilhemsruh, the'Ha-Jo Bar' in Albrechtstraße or the'Rialto Bar' in Pankow Wollankstraße. In 1954 he toured Germany with his trio for almost two years. He played in Kiel, Heilbronn, Aachen, Hanover and longest in Bremen in the mocha bar of the Entertainment Palace'Astoria'. Back in Berlin he could be heard in his old clubs, plus the'Koralle' in Invalidenstraße. This was something like the regular pub of the young actor Manfred 'Manne' Krug, who, when the mood was really at its peak, entered with his banjo and sang the American blues and Dixieland numbers. Afterwards, everyone took the subway to the'bathtub' in Nürnberger Straße, where Johannes Rediske and his quintet were swinging in the most beautiful shearing sound.

Gustavus came up with a new musical idea - he founded the'Dizzy's' with drummer Günter Wendler, a trio with vocals that developed a successful stage program with swinging titles and slightly cabaret lyrics. For ten years the'Dizzy's' were fully booked, with fixed dates and guest performances that even took them as far as Finland. In 1968 the'Dizzy's' split up.

Manfred Gustavus joined the Berliner Rundfunk, first as music editor for dance music, later as producer. He was responsible for music recordings of the'Klaus Lenz Big Band', for productions of the'Puhdys', for the Berlin recordings of the Radio Prague Dance Orchestra, the studio work of the Rundfunktanzorchester Berlin, and guest productions of Max Greger, Helmut Brandenburg, Greetje Kauffeld and Uschi Brüning.

Filter
No results were found for the filter!
Manfred Gustavus: Cherokee Art-Nr.: BCD16224

1-CD with 16-page booklet, 18 tracks. Playing time approx. 66 minutes. Manfred Gustavus has been a leading figure in Swing music since the early 1950s in East Germany. After the fall of the Wall he regrouped with his old mates, and now...
$15.67 $17.92
Song preview
Trusted Shops Reviews Toolkit: 1.1.2
Funktionale