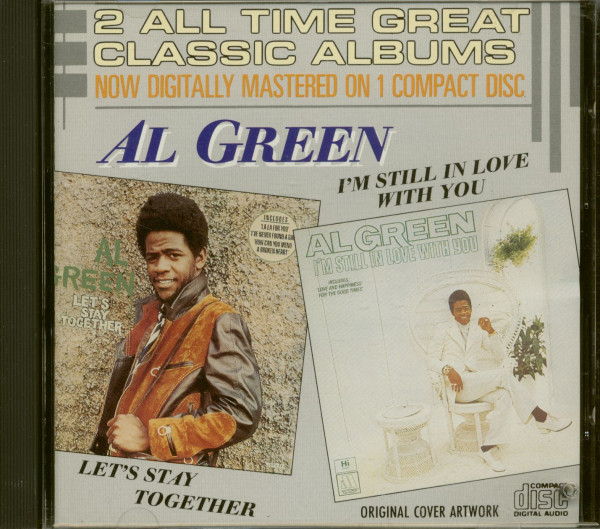 Al Green: Let's Stay Together - I'm Still In Love With You (CD, Cut-Out)

A more mercurial character than Al Green would be hard to find. So would a more romantic soul balladeer. From the moment Memphis producer Willie Mitchell began molding him into a singular performer at Hi Records, stardom was assured. His lilting tenor conveyed love and intimacy like no other soul man of his era.

Born April 13, 1946 in tiny Dansby, Arkansas, Al Greene grew up in rural Jacknash, Ark. His family toiled as sharecroppers until relocating to Grand Rapids, Michigan in 1955. Al’s dad was religious, and when he learned his son had joined an R&B vocal group during the mid-‘60s, he was evicted from the family domicile. The young singer persevered, his Creations making a 1967 single for the Zodiac label that stiffed. But their manager Lee Virgis launched his own label, the oddly monikered Hot Line Music Journal, and Al Greene & The Soul Mates waxed the ethereal Back Up Train, penned by Soul Mates Palmer James and Curtis Rodgers.

“Palmer James and Curtis and all those boys, they did such a great job with that music,” says Green. “They kind of discovered me.” Larry Uttal’s New York-based Bell Records picked up national distribution. In early ‘68, Back Up Train chugged to #5 R&B and #41 pop. ““It was my first song ever, so I have a special kind of a bond to it,” says Green. “I thought it was a good song, and it sold real good.”

Yet The Soul Mates broke up. Green dropped the second ‘e’ from his name, and he was scuffling when herode a Greyhound bus into Midland, Texas for a late ’68 gig. Mitchell was the bandleader that fateful night. “He wanted to get his fare back home,” said the late Mitchell. “I told him he could do a couple of tunes with the band that night, and I would help him get back. When I heard him sing, I said, ‘Well, he needs to go back to Memphis with me.’ So I asked him if he would like to go. I said, ‘You can be a star!’ He said, ‘How long would it take?’ I said, ‘About 18 months.’ He said, ‘I don’t have that long to wait!’ Anyway, he did come back to Memphis, and we started working, trying to figure out a new style for him.”

Green’s first Hi single, a pulverizing revival of The Beatles’ I Want To Hold Your Hand, didn’t reverse Al’s fortunes. “I suggested singing it to Willie,” said Green. “He had asked me, ‘I Want To Hold Your Hand?’ I went like, ‘Yeah, it’s a great song!’”  But things turned around. Green’s blues-drenched cover of The Temptations’ I Can’t Get Next To You just missed the R&B Top Ten in 1970.  Then Al wrote the gorgeous Tired Of Being Alone, his first gold record in ’71.

“I had a certain style. I used to be a jazz player too, so we started coming up with jazz chords--pretty music on the top, and heavy on the bottom. And it just clicked,” said Mitchell. “You could see the prettier music from ‘Tired Of Being Alone.’ Different changes, the nice bouncy rhythm on the bottom. So you could see that Al’s voice was changing. I was trying to get him to sing softer.”

That formula hit its zenith on Al’s magical across-the-board chart-topper Let’s Stay Together, which entered the R&B hit parade shortly before the end of ’71. “Al was over in Europe. And I came up with the music, and when he got back to Memphis he put the lyrics over it. We had come up with the style of the drums and everything, so that clicked,” said Mitchell, who asked the young singer to supply lyrics. Green dashed off whatever popped into his head while sitting in the lobby of Willie’s Royal Recording Studios. Also in on the musical side of the song’s creation was Booker T. & The MG’s drummer Al Jackson, Jr., who ended up playing on it too, moving Howard Grimes over to congas. “Al wanted Al to play on his session, so Al came over from Stax,” says Howard. “It gave Hi another elevation of rhythm, with Al (Jackson) playing and me playing.”

“I was trying to get him to sing softer,” said Mitchell. “So we finally persuaded him on ‘Let’s Stay Together,’ him singing softer and not screaming so loud.” That wasn’t easy for Green. “Oh man, I had to work on that,” he says. “Man, it took him a long time to do it, I’ll tell you that. ‘Cause I had shoutin’ on my mind!” Green didn’t envision Let’s Stay Together being a hit, much less the monster that it became. Fortunately, Mitchell had the last word, and Al had his trademark feathery vocal sound that would move millions of Hi platters during the ‘70s. 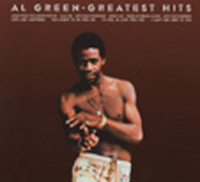 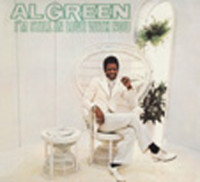 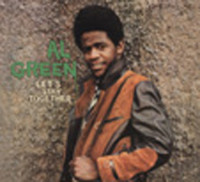 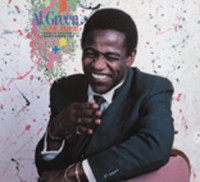