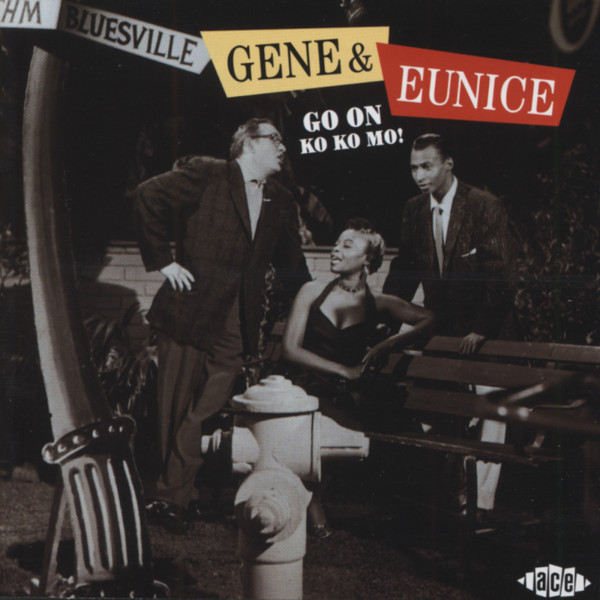 (ACE) 28 tracks with color booklet.
Seeing Eunice Levy, of Gene & Eunice, perform this year at the Southern California Doo Wop Society reminded me how under-reissued their magnificent R&B duets had been. Then along comes this first-ever CD package. Gene & Eunice were the epitome of cultured harmony duets and listening anew reinforces that assessment. Eunice told me "The key to our harmony was that the two of us...the harmonies were there together".
The pair met in 1954 in Los Angeles, Eunice arriving to make her way in music impressed by memories of Ann Walls playing with Ernie Fields' Orchestra in Phoenix. Recalls Eunice "When I saw her complete control of the band, for a few minutes she was the queen. They had to do everything she said, it seemed good." Eunice teamed up with Gene "a struggling young man trying to make it entertainment-wise...and make big money the fastest way he knew". They became extremely popular and made appearances in such diverse arenas as the Apollo Theatre and Dick Clark's TV show. As Eunice put it, "You'd hear Ko Ko Mo being played all over the place. We had to be protected, they pulled off Gene's collar and tie, and someone had his coat-.-that's when the police stepped in." Similarly down South "You never saw such a foot stompin,' dust-kickin' crowd!
"Their success came from their joint creativity as performers and writers. Eunice says "Gene would sit down and start tinkling with the keys on the piano. He could start things but didn't know how to bring it to a tidy ending." That was Eunice's role, although sometimes hers was the initial idea. Their winning song, Ko Ko Mo, was made for Jake Porter's Combo label initially (and the original version is featured here), and then re-cut for Aladdin. "When we heard it on the radio for the first time, it wasn't us, it was the Dooley Sisters' cover!" The beautiful R&B hit This Is My Story came in response to Aladdin boss Eddie Mesner's request "Can you write me a love song?", while their 1959 pop hit Poco-Loco was aimed heavily at the Mexican market where "records would sell for a long time".
The 28 tracks here feature Gene & Eunice's biggest records. Also included is a unique and charming Combo demo session (of mainly prototype Aladdin recordings)-.-rare solo recordings from each (with Gene in an early R&B groove and Eunice showing uptempo grit), plus an unissued doo wop from her with the Four Feathers. Key West Coast session men in attendance include Maxwell Davis, Jake Porter, Plas Johnson, Rene Hall and Earl Palmer. Stuart Colman's well-researched notes (based on fresh interviews with both Gene and Eunice) give renewed insights into what made the duo stars and provide much new information where there was little before. This CD production by John Broven is long overdue but well worth the wait.(By Seamus McGarvey)