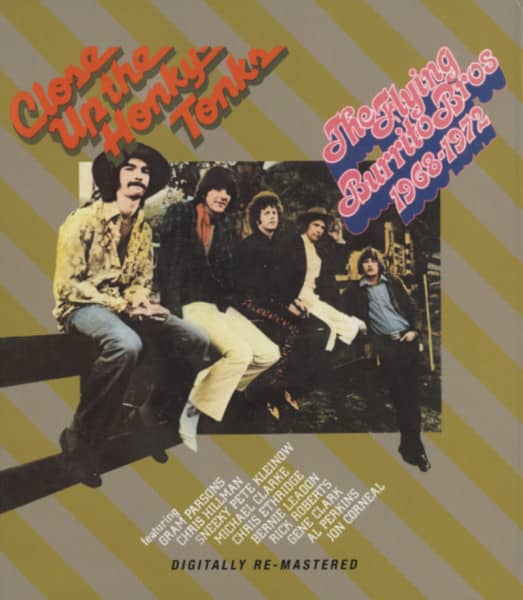 Cosmic American music. It was enough to make a country fan choke on soppin' syrup and go find some hippie ass to kick, but that was Gram Parsons' vision when he founded the Flying Burrito Brothers. The group name had been coined several years earlier by one of the International Submarine Band. The Byrds wanted it for an LP title, but Parsons hung onto it, and—after leaving the Byrds in England—returned to Los Angeles with his group name and his big dream. Parsons connected with Chris Ethridge, who'd played bass on some Submarine Band sessions, and then Chris Hillman left the Byrds and joined them. A steel guitarist was core to Parsons' vision, and he found Sneaky Pete Kleinow working in animation studios by day and moonlighting at hillbilly clubs. "Sneaky Pete is different," said steel ace Buddy Emmons. "He has a tone most steel players try NOT to get, the one we started out with, but he makes it work."

Getting a record deal was surprisingly easy. "We had more Byrds than the Byrds did," said Ethridge. Elektra, was interested, as was Warner Bros., but A&M's art director knew Chris Hillman and insisted that the Burritos meet Jerry Moss, the 'M' in A&M. Despite dismal sales of the first Dillard & Clark LP, Moss gave the Burritos $1500 apiece, and they went to Nudie's Rodeo Tailors on Lankershim Blvd. to order psychotropic-themed Nudie suits. And then it was time to come up with some songs. "'Sin City' is the song that personifies the Burrito Brothers," Hillman said later. "I wrote half of it while Gram was asleep in the morning. I said, 'Gram, wake up, I've got something really interesting. A verse and a chorus.' He thought it was great, downed a cup of coffee and we finished it in ten minutes. I wrote the first verse, 'This old town's filled with sin/It will swallow you in…' I'd just been through a divorce. My wife had been having an affair with [the Byrds'] road manager and there's some of that in there. Gram came up with the 'green mohair suits' stuff. A fascinating line. And then it went off into some abstract thing about being at the Whisky-a-Go Go on Sunset Boulevard. It was a microcosm of the culture at that particular time. People like Gene Clark from the Byrds, who came here from Kansas all bright-eyed, talented and idealistic, and the whole thing just swallowed him up. And Robert Kennedy was the fool who '…came around/And tried to clean up this town.'" The "gold-plated door on the 31st floor" belonged to Larry Spector, the guy who'd seduced Hillman's wife. "Spector was a thief, it was as simple as that," Hillman said. "And his condo was on the 31st floor behind this awful, garish gold door." Hillman and Parsons sung Sin City with the Louvin Brothers' demented piety. Were you in a backwoods church or roaring through one of L.A.'s vertiginous canyon roads in a drug-addled haze? Hillman and Parsons ensured that you were never sure. "There was a time," Hillman said, "when I'd hear someone talking about Gram Parsons' beautiful composition 'Sin City,' and I'd go, 'Hey, I had half that song written before he was awake.' And my wife would look over and say, 'Would you like to trade places with him now?'"

Sin City was one of the first two songs recorded at the chaotic album sessions. Drummer Eddie Hoh took A&M's money, played on this and another song, and then, in Parsons' words, "scored and left town." Sneaky Pete overdubbed his steel guitar and Ethridge probably overdubbed the piano; all other parts were live to tape. Released in mid-April 1969, the LP, 'Gilded Palace Of Sin,' has yet to be certified gold, but Rolling Stone placed it at #192 on its 500 best albums of all time. It became the cornerstone of alternative country music - as nebulous as that term is, influencing not only roots artists, but even some mainstream Nashville acts. Examine the DNA of the 20th century's biggest-selling LP, the Eagles' 'Greatest Hits,' and 'Gilded Palace Of Sin' is in evidence there, too. (Chris Hillman quotes compiled from the L.A. Times, No Depression, and interviews in Ben Fong-Torres' 'Hickory Wind').