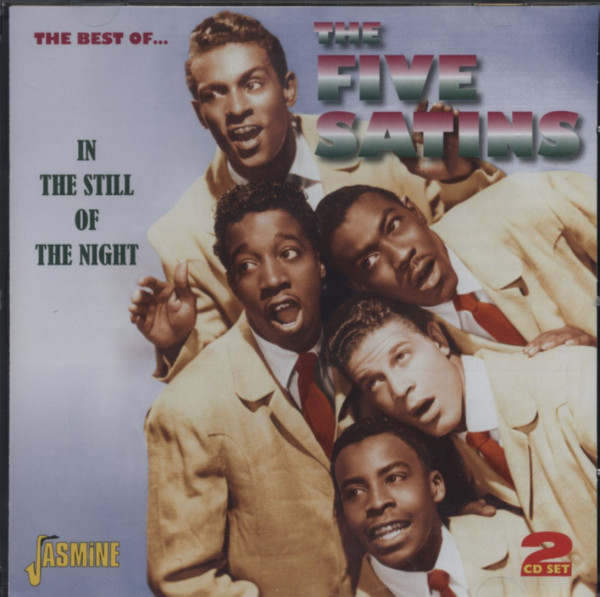 Article properties: The Five Satins: The Best Of ... 2-CD

I'll Be Seeing You

Everything was back to normal with The Five Satins. Founder Fred Parris was back after completing his Army hitch, which forced him out just as the Satins were hitting with In The Still Of The Nite, prominent on the 1956 edition of this series.

While Parris was in Japan wearing military fatigues, Bill Baker led the Satins on their next big one in '57, the smooth ballad To The Aisle.  Even after Fred got back stateside, Baker led the quintet on New York-based Ember Records. Fred put together a new incarnation of The Scarlets, which he'd led prior to the Satins, to record for Marty Kugell and Tom Sokira's tiny Klik label in his hometown of New Haven, Connecticut (the pair had recorded In The Still Of The Nite in a chilly New Haven church basement to get the Satins rolling not that long before).

In mid-'58, Parris, the Satins, and Ember reunited, though there were only four Satins (Parris, ex-Scarlets tenor Nate Mosely and bass Sylvester Hopkins, and early Satins baritone Lou Peeples) on A Night To Remember (maybe that's why they were temporarily billed as Fred Parris and The Satins). They solidified with Parris, Peeples, Hopkins, and two ex-members of New Haven's Starlarks: Wes Forbes and Richard Freeman. A Parris-penned Shadows went to #27 R&B for them in late '59.

Particularly poignant was the Satins' rendition of the pop evergreen I'll Be Seeing You, written in 1938 by Sammy Fain and lyricist Irving Kahal and a #1 hit for crooner Bing Crosby as the title theme of a 1944 wartime movie. The Satins' remake, awash in strings arranged by Leroy Kirkland, sports a moving lead from Parris that does its nostalgic lyric justice. Paired with Fred's A Night Like This, I'll Be Seeing You was a #79 pop seller in the spring of 1960.

The expert balladeers had a slew of early '60s singles for Ember, Cub, United Artists, Chancellor, Roulette, and Warner Bros. before changing their mid-decade billing to Fred Parris and The Restless Hearts on Checker and Atco. They reverted to The Five Satins handle during the early '70s at RCA and Kirshner. In 1982, Fred Parris and The Satins had a pop hit on Elektra with an oldies medley, Memories Of Days Gone By. Guess what song served as its climax? In The Still Of The Nite!