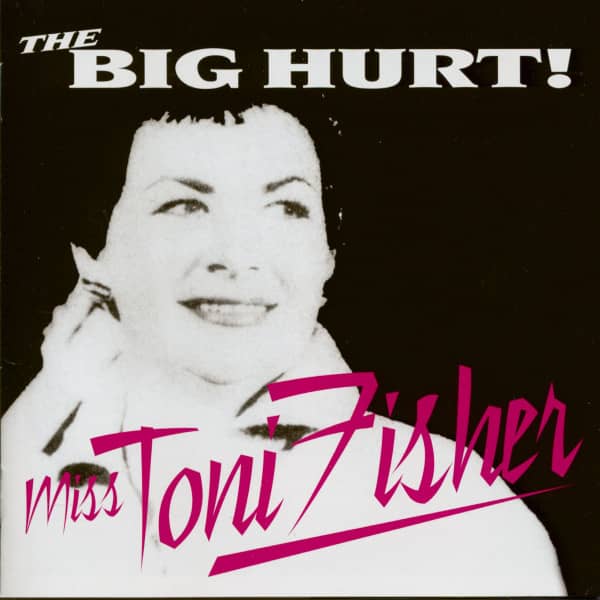 (Harkit Records) 30 tracks 1959-67
An accomplished singer of many years, who, with producer Wayne Shanklin, scored a huge worldwide hit with “The Big Hurt”.  The record caused a stir with its unique phasing, or, misaligned sound (due to the out-of-phase phenomenon that occurred when the twin-tracking effect ‘went wrong’).

Such is the history of hit! Sadly, despite an effort to capture further success with “West Of The Wall” (some say, one of the first protest songs), which was her only other hit, Toni skipped from label to label without any other winners.

Born 1931 in Los Angeles. Singer whose biography has hardly become known despite three US hits. Already at a young age she appeared several times in the Marco Juvenile Review, a singing show for students three times a year in a stage school called Fanchon & Marco. She also belonged to the fanchonettes, appeared on television and performed in clubs such as the'Silver Slipper' (Las Vegas),'Coconut Grove' (Los Angeles) and'Big Top' (Long Beach). In November 1959 she scored a No. 3 hit for the small signet label with "The Big Hurt' (also the title of her LP).

Composer and producer: Fisher's husband Wayne Shanklin, who has also created song classics such as'Chanson d'amour','Jezebel' and'Primrose Lane'. Fisher recorded more singles for Columbia, Smash and Capitol until 1967, after which they lost track. How Deep Is The Ocean' by Irving Berlin was the second hit on Signet in 1960. A detour to the big-top label in May 1962 brought her chart success no. 3,'West Of The Wall'. The Berlin-based love story reached number 37 on the Billboard charts, having once again been written by Wayne Shanklin. Unpublished worldwide, Fisher's German version of the Wall Romance was found on an American master tape.

Title according to Bandkarton:'There in Berlin'. The song (German subtexter: Bob Rei, a pseudonym for Hermann Lüth[T921 - 1978]) is registered at GEMA under the title'Grüß mir Berlin'. With these three words Fisher also begins her singing. A third variant was research on the local music publisher: In the paper bag of the Fisher acetate of the original version was a text sheet of the German version called'In West-Berlin' - but with a completely different, but thematically appropriate wording. Additional confusion is caused by another'Greet Me Berlin'. Authors: Horst Ramthor - Fred Liese.

However, this number has been registered with GEMA since 1955 and has nothing to do with'West Of The Wall' by Wayne Shanklin - Bob Rei. A release of the Toni Fischer recording on the local Heliodor label was possibly planned, it was not only the original "West Of The Wall' was released with the catalogue number 453 125 on 16.7.1962. Toni Fisher (who at the beginning lacked her usual addition'Miss' on "West Of The Wall') died on February 12, 1999 after a heart attack in the 5000 inhabitant town of Hyrum, US state Utah. Seven years earlier, the artist had been immortalized in a song by the Texas rock band Drain,'The Ballad Of Miss Toni Fisher' (Trans Syndicate TR 11). From the Bear Family book - 1000 pinpricks by Bernd Matheja - BFB10025 -