DEAR ONE /KOMM IN MEINE WELT 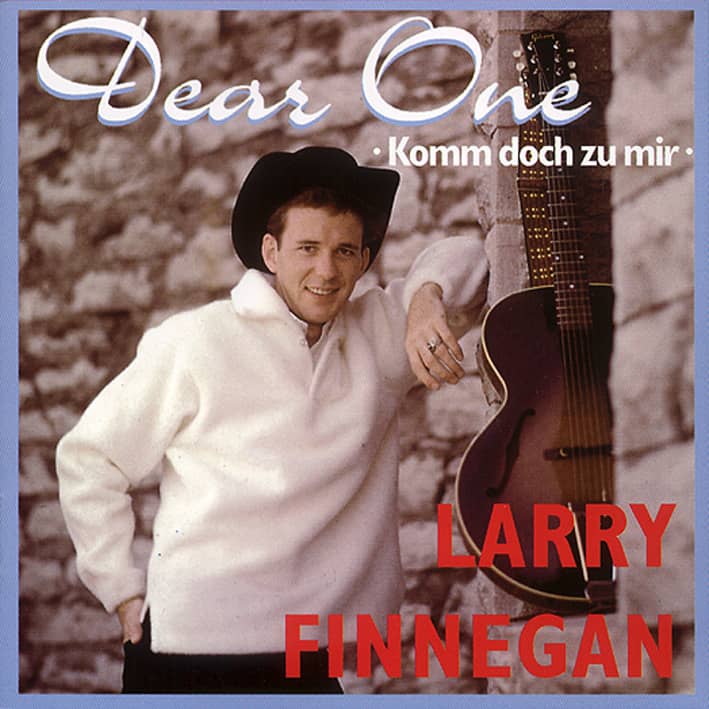 Larry Finnegan will be forever associated with one hit, Dear One. In the Spring of 1962, it rose to #11 on the 'Billboard' charts, and made him a star in the years between rock 'n' roll and the British invasion. Larry created his own musical identity by mixing rock 'n' roll, pop, and country. He might have been a One Hit Wonder back in the United States, but he was a star overseas. For a decade after his breakthrough hit, he toured Scandinavia, Germany, and Switzerland, recording prolifically and headlining his own shows. This CD comprises Larry's first recordings, I'll Be Back, Jack/There Ain't Nothin' In This World, his four Old Town singles, including Dear One, as well as his very rare German sides. All are making their first appearance on CD.

John Lawrence Finneran was born on August 10th, 1938 in Jamaica, a suburb of New York. He had six brothers and one sister. The family moved to Queens, N.Y., where his father was a policeman. When just a young boy, Larry started singing in a church choir and in time he learned to play guitar, drums and piano. His big interests were journalism and music. He attended Notre Dame University in South Bend, Indiana as a Communication Arts student. While there, he developed an interest in the Swedish welfare system (healthcare, disability pension, child allowance etc.) and as early as 1960 was describing Sweden as a leading country in these areas.

When it came to music, Larry counted Johnny Cash and Don Gibson as his two favorite artists. While at the university he and his older brother Vincent, then a senior at Boston College, wrote Dear One. They started knocking on the doors of record companies all over New York, but had no takers until they met Hy Weiss, the owner of the small but successful Old Town Records. Weiss had already produced such hits as So Fine by the Fiestas from 1959, and Let The Little Girl Dance by Billy Bland the following year, as well as Life Is But A Dream by the Harptones. Hy Weiss recognized Larry's talent and saw the potential in Dear One. He also changed Larry's last name from Finneran to Finnegan, figuring that dee-jays stood a better chance of remembering a common name like Finnegan.

Dear One was recorded at Mira Sound Studios, West 54th St., New York. According to Vincent Finneran, "There was no demo version of ‘Dear One', just one recording with two takes. And the thing that made the song successful was the engineer Bill McMeekan. He put five microphones in and around the piano and three microphones on the drums which gave the song a unique sound. Dick Pitassy played piano. Two different girls sang on 'Dear One'; one did the opening female lines and another did the later ones."

One of the girls, Bambi LaMorte (today Mignon Lawless), remembers, "Larry dated one of my roommates (Sandy Bryant). I attended St.Mary's College which is directly across the street from Notre Dame. I met Larry through Sandy. We would sometimes all hang out together. I was a music major and since I lived in Pelham, New York (about 20 minutes from Manhattan), Larry asked me if I would sing a female part on his recording. I said 'Sure.' We went to a recording studio somewhere in Manhattan over Thanksgiving vacation 1961 and recorded 'Dear One'. The only professional musician was Gary Chester, the drummer. Larry felt it was important to have an experienced drummer. I believe there were two guitar players, both from Notre Dame. The only things I remember about that night were that the guitar players were not taking the recording seriously enough and kept making mistakes. Larry finally yelled at them and they shaped up. I don't remember how many tries it took to get the original, but they did a lot of starting and stopping. I do remember that I had to do my part cold turkey, without any practice. I only sang the introduction to ‘Dear One'. They didn't like the way I spoke the part, and overdubbed it later. I have no idea who the other woman singer is. Larry's agent hired someone to do it. Larry and I went back to the studio one night and recorded a song we wrote together. I played guitar, he sang, and then we dubbed different instruments onto the recording. It was fascinating to experience his creativity at work."

Dear One/Candy Lips was released as Old Town 1113 at the end of 1961. It climbed to #11 on 'Billboard's' Hot 100 in April 1962. Dear One wasn't Larry's first recording, though. In 1959, he recorded I'll Be Back, Jack for Decca Records. It wasn't released at the time, but with the success of Dear One, Decca issued it on their Coral label. They were of course hoping to ride on the success of Dear One but the record went nowhere. In fact, Larry himself couldn't follow the success of Dear One, although the follow-ups on Old Town were all in the same pop-rock-country vein. His treatment for example of Oh Lonesome Me is a delight.

In Sweden, Larry's first three releases, Dear One, Oh Lonesome Me, and Pretty Suzie Sunshine sold very well. In 1963, he was invited by Sonet to visit Sweden for an extensive tour. He immediately accepted and arrived for his first foreign concerts in August that year. Sonet signed him both as a singer and songwriter. One song he wrote, Johnny Loves Me, became a big hit by Dutch female singer Maria Pereboom, better known as 'Suzie'. Larry not only wrote the flipside, When My Love Passes By (Sonet T 7572), but also produced the record...