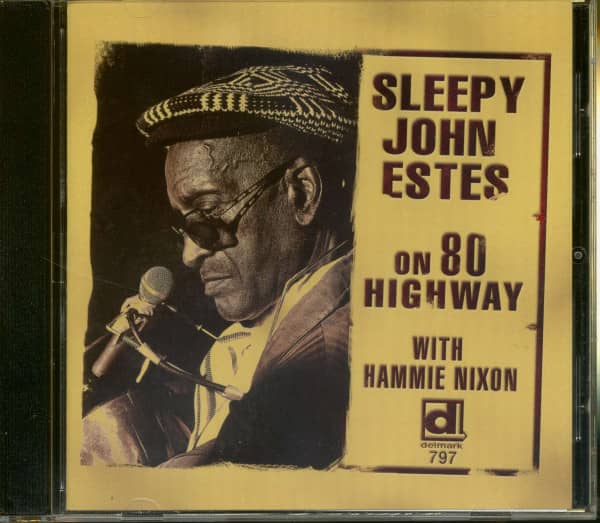 These recordings were made in 1974, and remaimed unissued. SLEEPY JOHN ESTES gtr/voc, HAMMIE NIXON voc/hca/kazoo.

This album was recorded July 19, 1974 just prior to Sleepy John Estes and Hammie Nixon's first trip t Japan. I should mention that it was one of the very first tours of that country by a blues artist - precede only by a B.B. King State Department appearance. The Estes tour was a great success and even resulted in an Estes track appearing on the Japanese Top 100 chart, which enabled John to purchase a better home back in Brownsville, Tennessee. Complete notes by Bob Koester enclosed.

John Adam Estes was born on January 25, 1904 in Ripley, Tennessee. His recording career spanned six decades from the '20s until his death on June 5, 1977. 'Sleepy John Estes was one of the most individual of all recorded blues singers. He sang with phrasing that fairly dripped with expressiveness in a high crying tone that seemed often like he was speaking to the listener.

The songs he wrote were well suited to this treatment, dealing frequently with his and his neighbors' lives in Brownsville, Tennessee.' Gerald Brennan. This session from July 19, 1974 was recorded just before Sleepy John and Hammie Nixon departed for a tour of Japan. None of these performances have ever been issued. Sleepy John Estes, vocals, guitar; Hammie Nixon, vocals, harmonica, kazoo.

Born in Ripley, Tennessee in 1904 John Estes lived most of his life in Brownsville, Tennessee. He did his first recordings for Victor in 1929 and 1930, a career interrupted by the great depression. When the jukebox rejuvenated the record business, he was picked up by Decca in 1935. Blues artists who wrote their own songs were the rule rather than the exception in those days and his discs sold well enough that he stayed with Decca for the next five years. He even made a trip to New York during the Chicago recording ban of 1938. But on one of those trips, having cashed in their train tickets from Dec., he and harp player Hammie Nixon hoboed on a train where John lost his last eye to total blindness in a gravel car when a piece of grav-el flew up and hit him in the eye.

Under the aegis of publisher Lester Melrose John moved to Bluebird for a session in 1941, a new career path interrupted by World War 11 and the Petrillo recording ban. No one could call John's songs simple, but he was an uncomplicated man. He loved his blues, his booze and his family. Wishing to put Hammie Nixon's name on the Decca labels, he gave him song credit (although John kept the $10 royalty buyout payment.) John was not a roving song collector like Big Joe Williams. He wrote in Brownsville or on occasional trips to nearby Memphis, and often about the people and places of his hometown. Those are real people and places in the songs that rise above the usual insight-ful generalizations about life and love. Brownsville and neighboring towns gave the world more bluesmen than you might expect. Mandolinist and fellow Victor, Bluebird and Delmark artist Yank Rachell and John's faithful companion Hammie Nixon, as well as Son Bonds whose Decca/Champion recording session led to John's Decca stint, were Brownsvillians.

Nearby towns gave us Kids Spoons and John Lee Williamson, aka Sonny Boy I. After the war, the blues business, which had involved jazz-influenced trumpet-sax band accompaniments, soon made room for the more down home electric blues and, with a few exceptions, the old country blues was out of the R&B picture. However, John did record for the legendary Sun label although the results only appeared years after Delmark's first albums. A filmmaker had been to Brownsville for the first chapter of a production to be titled Citizen South-Citizen North when we met him at the Jazz Record Mart where he spoke with Joe Segal about filming a jazz artist at one of his Sutherland Hotel Jazz Showcase sessions. So I went to Brownsville to bring John back to Chicago for recording sessions. He told us about Hammie's presence in Brownsville and Yank's in Indianapolis and we eventually included them.

On our return trip to Chicago John asked to go to 437 South Wabash where his brother worked. That was next door to Jazz Record Mart and I had met his brother, who was older than John, not realizing of course who he was. In fact, one day I almost called the brother "Sleepy John" but decided that would be unkind. Had I been my usual crass self, we might have found John before we did. I should mention that blues writer and pro-ducer George Mitchell of Atlanta, GA, who later worked at the Jazz Record Mart, appar-ently met Sleepy John before I did. The young white audience for blues was only beginning to build in the early 60s but John was able to find some work including a European tour with the American Folk Blues Festival and an appearance at the Newport Folk and Ann Arbor Blues Festivals. I judge any blues artist by his voice and his lyrics.

I am not a guitarist. But at least one of John's guitar patterns was adopted by Big Bill Broonzy and in a 1998 Delta blues compila-tion, a sadly uncredited writer states that "his style of accompaniment, although subtle in its approach ...became the foundation for Texas and Chicago blues style." This author goes on to cite Jimmy Reed, Lightnin' Hopkins, Freddie King and Stevie Ray Vaughan. -Bob Koester, July, 2008 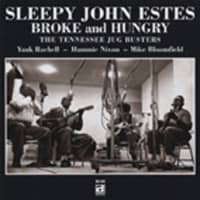 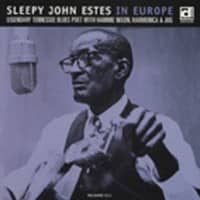 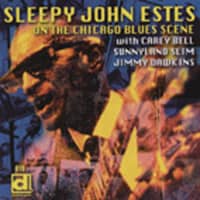